For 24 hours we’re offering a powerful non-fiction title for just $2.99! Pick up Judith Hartzell’s book By God’s Design: Overcoming Same-Sex Attraction: A True Story for a discounted price for the Kindle during our one-day sale event. This special pricing will remain through the weekend and then it will return to regular price. 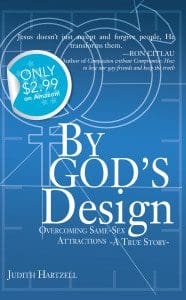 Synopsis: What happens when a man finds himself sunk in a downward spiral of risky homosexual acts and he knows no way to escape?  And when he is about to lose his prestigious and profitable career, along with his marriage, and even his life?  The answer would have been certain tragedy for Alan Medinger if not for a praying wife and the mercy of God. Restored and inspired, he went on to establish a ministry for same-sex-attracted people (Regeneration of Baltimore, Maryland), where he and his wife, Willa, influenced hundreds to turn from homosexuality and seek holiness.  Through their work with Exodus International, they influenced thousands more. When quarrels and dissension affected Exodus in Alan’s last years, he predicted its demise and explained how ministries would continue to succeed without it. Through Alan and Willa Medinger’s story in By God’s Design,  you will learn the truth about homosexuality, its causes, its healing, and how the church can help. BUY NOW