For 24 hours we’re offering a brand new title for just 99¢! Pick up Larry Vaughn and Mentora Vaughn Gratrix’s new book Hollywood’s Chosen: An Insider Shares His Story for less than a buck for the Kindle during our one-day sale event. After Thursday the price will go up to $2.99 through the weekend and then it will return to regular price. So don’t wait– pick up Hollywood’s Chosen right now for just 99¢ on Kindle. 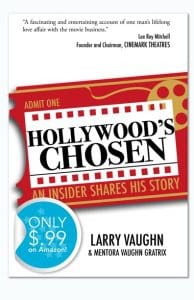 Synopsis: Larry Vaughn’s fate would be determined by a single, high-stakes moment. Drawing the right card meant success and a cut in millions of dollars. Failure meant Jaws would not play in his theatre, and Vaughn would miss one of the biggest hits of the decade.

For as long as there have been movies there have been film buyers, and yet hardly anyone outside the motion picture industry has heard of the job. They are the hot shots celebrities clamor to meet. These Hollywood gamblers use their skill and sheer instinct to decide what movie they think will be the next box office hit for their theatres. Vaughn’s success with Jaws, Star Wars, Rocky and Forrest Gump marks him as one of the best.

Despite a life full of red carpets and movie premiers, Vaughn’s story begins in a poor, single-parent household as a boy who simply loved spending Saturdays at the movie theatre. His life takes a wild ride through Hollywood, climbing from poverty to riches by pure determination and a passion for film.

Through a cast of characters that includes celebrities such as Sylvester Stallone, Michael J. Fox, and Clint Eastwood, Vaughn describes the drama and intrigue that accompanies being one of Hollywood’s chosen and shares about films, family, and a crucial decision that put his faith and career at odds. BUY NOW!