For 24 hours we’re offering one of our hot non-fiction titles for just 99¢! Pick up John Muntean’s patriotic thriller Willing to Die for less than a buck for the Kindle during our one-day sale event. After Thursday the price will go up to $2.99 through the weekend and then it will return to regular price. 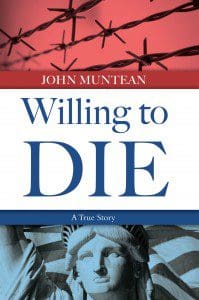 Synopsis: Imagine living under the constant danger of the Secret Police bursting into your home, and taking you—or someone you love—to prison, never to be seen or heard from again. Imagine watching your country suffer from the brutality of the Communist regime that swept through Eastern Europe in the wake of World War II. That was John Muntean’s reality in Romania. That is what he fought for years to escape. And that is what he fears is coming to America.

A fast-paced spiritual thriller, Willing to Die (Ambassador International; September 2013; $13.99, paperback), reveals the persecution John Muntean and his wife, Stela experienced, uncovering the evil that accompanied Communist ideology to Romania. Through fear, loss, and pain, the amazing power of God’s love provided a way for them not only to survive, but to prosper. And perhaps most importantly, this book shows all readers that many of the things John and Stela suffered to escape from in Romania are now appearing in America. “History appears to be repeating itself as Communist tendencies become more apparent in American politics,” warns Muntean. BUY NOW