This week’s sale includes FOUR BOOKS, instead of just one! We’re dropping the price of the entire Crossing series by author Carrie Daws. Each one will be available for just 99¢ today only. After Thursday the price will go up to $2.99 through the weekend, and then it will return to regular price. So don’t wait- pick up your copies now! 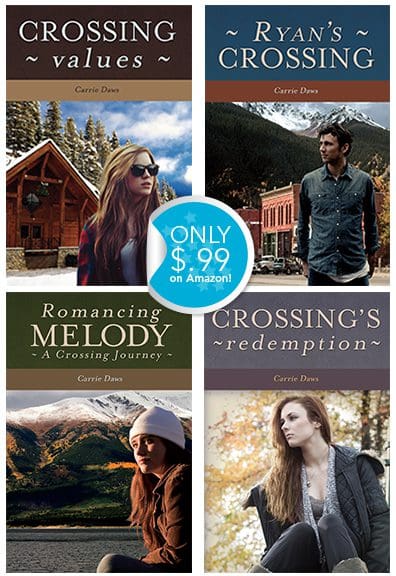 Ryan’s Crossing: After ten years, Ryan’s parents found his runaway sister, Amber. Now, as he drives to meet up with her and his parents before her wedding, his mind fills with the changes coming. Besides figuring out where she will fit into his life, a job change is on the horizon for him. But should he stick with small town life? Or should he move to Portland, Oregon? Meeting the family his sister is marrying into only brings more questions. Maybe moving to nearby Portland is the better choice. But something about the town of Crossing calls to him. Is it the friendly people who openly accept him as Amber’s brother or the cute brunette who happens to be sister of the groom? As Ryan weighs the pros and cons, He decides to put God to the test. Will He answer? Will He let him know which choices to make? And what if Ryan doesn’t like the answer? BUY NOW

Romancing Melody: Newlywed Melody Podell gives up everything she has ever known to follow her husband, a soldier in the US Army, across the country to his duty station at Fort Bragg, NC. Army life is not what she expected and she struggles to adapt to it and its constant call on her husband’s time. Soon after giving birth to their first child and dealing with her husband’s deployment to a dangerous part of the world, tragedy strikes forcing Melody to travel back to home. Walking back into the lives of her old friends in Crossing, Oregon, is the last thing Melody wants to do, but could she be missing something? Melody must decide if God is trustworthy even when she doesn’t like His plan. Is He really in control? Does He have a plan and a family for Melody in Fort Bragg? BUY NOW

Crossing’s Redemption: Many in Crossing, Oregon, would describe long-time resident Patricia Guire as an eclectic force to be reckoned with, one who speaks her mind. Yet something is changing. She seems to be dropping out of her normal activities, becoming scarce around town and less available to her friends. Amber Yager feels called to check in on Patricia. Yet as she spends time with her and discovers Patricia’s hidden past, she is drawn in to a group that brings disquiet to her own soul, ripping open old wounds. Will the love she’s found in Crossing be taken from her? Or could both Amber and Patricia finally find peace as God shines light into the darkest places of their hearts? BUY NOW

Crossing Values: For years, Amber traipsed around the Northwest avoiding the skeletons in her closet. Job-hopping every few weeks, she refused to let anyone get close to her as she slowly made her way east. As winter plants itself firmly across the Rockies, she decides to take a chance on a job at a logging company with a family different from any she’s ever known before.
Watching the family interact creates more questions than answers for Amber. Feeling like she’s entered the happily-ever-after written at the end of fairytales, she watches for cracks in the façade. Surely as the days pass, the play-acting will cease and the real family will emerge.
Or could she be wrong? Could they truly be genuine? Could Faye understand the trauma from her past or Peter think of her as more than just the winter
office help? Could this family really hold the key to what she’s seeking? BUY NOW