For today only, we’re lowering the price of TWO books by author David Sitton.  Hard Fighting Soldier: Joe Cannon: 65 Years of Pioneer Gospel Exploits for the Glory of God, as well as Reckless Abandon: A Gospel Pioneer’s Exploits Among the Most Difficult to Reach Peoples will both be selling for 99¢ each TODAY ONLY!  Tomorrow, both books will return to their standard price of $7.99.  Be sure to purchase both copies before the day is out!

Hard Fighting Soldier: Joe Cannon: 65 Years of Pioneer Gospel Exploits for the Glory of God: Spearheads pierce targets! Joe and Rosa Belle Cannon joyfully spearheaded the gospel of Christ for more than five decades into the most complex, post-World War II cultures of Japan and Okinawa. After 24 years in the orient, Joe and Rosa Belle received new “orders from headquarters” and set themselves on “patrol” with the gospel, hiking with it, for days at a time, into some of the farthest flung tribes on the island of Papua New Guinea. BUY NOW

Reckless Abandon: A Gospel Pioneer’s Exploits Among the Most Difficult to Reach Peoples: God catapulted 20-year-old David Sitton from the beaches of south Texas to the stone-aged tribes in Papua New Guinea. Sitton traded sand and surf for cannibals, giant mosquitoes, 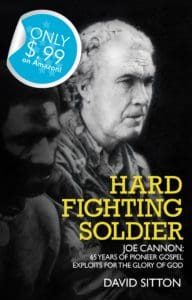 crocodile-infested swamps, malaria, and a hostile sorceress in order to advance the Good News of Jesus among unreached peoples. Reckless Abandon is a bare-knuckled dare to count the cost and seize the privilege of working with Christ in His worldwide mission. BUY NOW