Home » Blog » A Father’s Love: A Letter from Our Publisher

A Father’s Love: A Letter from Our Publisher 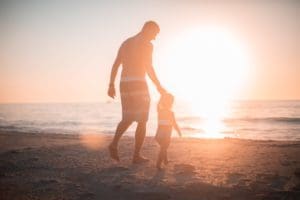 As we celebrate Father’s Day this year, let us each take a moment to remember the father or father-figure in our lives. Take a moment to remember the time they sacrificed to counsel you with their wisdom, the late nights they spent worrying over you, the money they gave to help you succeed, the encouragement they provided that gave you confidence, and the prayers that they offered on your behalf during difficult times. Take the time to thank them and show them appreciation for the investment they made in you.
The love of a father is a unique thing that each of us needs, and it is important to give gratitude to those who have offered that love. As we celebrate this Father’s Day, we are reminded of the love of our eternal Father in Heaven. “See what great love the Father has lavished on us, that we should be called children of God! And that is what we are” (1 John 3:1). There is no limit of love offered to us from our Heavenly Father.
This month’s excerpt, chosen for Father’s Day, was picked from Ambassador’s archives  and extracted from a book first published by us in 1986. Joseph and Ruth: A Classic Combination, written by Derrick Bingham, describes what the job and love of a father should and shouldn’t be. It demonstrates how Joseph’s father stepped onto thin ice when he showed him favoritism above his brothers. As a father, it is important to encourage your children and love them equally.
….
“’Father’s Day,’ the small boy pointed out, ‘Is just like Mother’s Day only you don’t spend so much!’ A father has been defined as someone who carries pictures where his money used to be. Parenthood is no easy task whatever its definition, and one of its deadliest traps is when a parent shows favor to one child above another.”
…..
“It is so easy to indulge in what seems a legitimate luxury which, in your heart, you know to be playing with fire. Favoritism fuels jealousy so deadly it can kill. You think I exaggerate? Joseph’s brothers very nearly got around to killing him because of what their father had created in their hearts by his behavior. As a father, watch out for that look of deference in your eyes, that touch, that planning, and those gifts towards your children. If you don’t, long after you are gone, that look, that touch, that plan, that gift will rancor in the heart of those who were not deferred to.”
…..
“I shall never forget a young man who came to see me one day about the unreasonable behavior of his father towards him. He poured out his story; words were tripping upon words as he told me the havoc his father was causing in his life. I identified with his hurt and agreed that his father’s behavior was most unreasonable, but slowly, there arose in my mind a feeling that I should warn him (it came from a line I once read in one of Frank Boreham’s books asking, what if the person receiving the spiteful letter you have just written were dead by the time your ‘I’ll-set-him-right’ letter arrived?).
Gently, I pleaded with the anxious chap in my study not to say anything to his father which he would regret as he might have to stand, God forbid, at his father’s graveside. He promised not to say anything hurtful but to wait for God to unravel His plan for his life. I am no seer, nor the son of one either, but the very next morning, his healthy father slumped over dead. Ashen faced, that young man returned to thank me for having warned him of the dangers of berating an unreasonable parent. He told me to share his story with others if I felt it would help.
The Scripture speaks of a man finding Joseph wandering in a field at Shechem. Poor Joseph! I can see him there in that field, unable to find his brothers, and maybe, in his heart, wishing he wouldn’t. Enthusiasm is always easier than obedience, but Joseph obeyed his father. Again, there are shades of the Savior in Joseph. The Father’s sending of his Son into the world was no irresponsible act, but we see the Lord Jesus ask in Gethsemane, ‘Father, if it be possible, let this cup pass from me.’ It was not possible, and in obedience, He faced the jealous men who shouted for his blood. Obedience, though it seemed to bring disaster, actually brought incalculable reward.”
……
“As Joseph lay in the pit, due to Reuben’s intervention, I’m sure he didn’t shout, ‘Praise the Lord! Don’t you fellows know I am to be Governor of Egypt and free you one day from death and starvation? This pit is marvelous because it is the actual highway of God’s guidance for me!’ No pit of suffering in our lives ever appears to be the path to blessing. Joseph thought he was merely doing his duty and suffering for it. So it is in all matters of guidance. Let us do the legitimate duty of today, no matter what it costs, and God will use it to lead us on to greater things. After all, the will of God for me is to do the legitimate duties of today. ‘Do as the occasion serves you,’ said Samuel to Saul, and it was good advice. The warning to fathers against favoritism and jealousy come like beacons from Joseph’s story to us today. Let us despise favoritism and jealousy.”

“The glory of children are their fathers” (Proverbs 17:6).

Let us remember these words as we honor our fathers on this Father’s Day.

To learn more about Derrick and Joseph and Ruth: A Classic Combination, visit HERE.