Recently, Ambassador International author Jennifer Ross posted on her author Facebook page about her oldest son, Caleb, reaching a great achievement at his 8th grade awards ceremony. Though he was one of a few students who maintained at least a 3.5 GPA during his middle school years, Caleb’s name was accidentally not called during the ceremony. “We hold no ill feelings—we all make mistakes,” Jennifer wrote on a follow-up post about the school and the individual calling out the names. To help give her son the recognition she felt he deserved, Ross encouraged her fans to “like” her post and leave encouraging comments. Boy, did her community deliver! With nearly 300,000 comments, 86,000 shares, and over one million “likes,” Caleb has received much love and appreciation over the last few days.

Victories such as this are wonderful things to celebrate for a mother, especially Ross. When Caleb was just 6 and a half years old, doctors found a large tumor in his brain. In this dark time, Ross wondered if she would ever have these kinds of victories with Caleb. Through many tears and much prayer, Jennifer watched her oldest son undergo intense surgery and recover beautifully. About a year later, Caleb again underwent surgery to correct his eye, which was slightly damaged when the brain tumor was removed. This boy is a fighter! Ross says, “The dedication that he puts into his studies is absolutely amazing to me. I could not be more proud of the fine young man that he is becoming. He’s my hero.”

Ross would tell you she has five sons, though you would only see four boys’ heads in the back of her car. Her fourth son, Isaiah, only survived for fifteen minutes after being born at just nineteen weeks in 2008. Caleb faced the pain of losing a brother and the fear of almost losing his mother in addition to his own challenges. Ross said that Caleb “stood strong” during the time after Isaiah’s death. In her book Ross chronicles the challenges she faced while pregnant with Isaiah up through the moments the doctors explained she would die if she did not deliver her son early. Isaiah’s Story is a touching book that Ross hopes will comfort other parents who have lost a child. Her sincere words speak volumes of the sovereignty of God and His perfect plan. 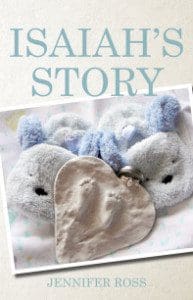 Synopsis: On August 3, 2008 at nineteen weeks and three days pregnant Jennifer and her husband said a heartbreaking goodbye to their son Isaiah. Jennifer suffered from a condition called Disseminated Intravascular Coagulation. With only a thirty percent chance of survival, Jennifer was instructed to have labor induced due to this life-threatening condition. Jennifer shared fifteen priceless minutes of life with her newborn son in her arms before he was delivered into the arms of his Heavenly Father. Isaiah’s Story chronicles Jennifer’s emotionally traumatic journey through the personal struggles that she faced, mixed with the beautiful hope that she clings to. Take the journey through this mother’s eyes, heart, and soul as she brings to life a little boy who was here for a short time but who has touched many lives with the telling of Isaiah’s Story. BUY NOW