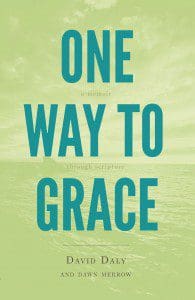 For immediate release: Author David Daly tells the story of his life growing up in Northern Ireland during The Troubles, the period of great civil unrest that struck the country during the Twentieth Century, and shows how it led him to become a devout believer. As his story unfolds in One Way to Grace: A Memoir through Scripture (Ambassador International; July 2013; $13.99, paperback), Daly uses his powerful testimony to show how a person can come closer to God—even in times of struggle.

David Daly’s life didn’t start out easy. Growing up in Belfast, surrounded by haunting murals signaling which areas were Catholic and which were Protestant, the danger around him was real. Without God in his life, Daly felt aimless. In One Way to Grace, Daly explains how he found himself battling numerous demons, some of which threatened everything he held dear. Eventually he was faced with a choice: overcome them, or else lose everything.

Daly’s life has taken him around the world, from Israel to America, and the lessons he has learned along the way have forged a devout believer. This story of a man learning to love God despite hardship is a powerful testament to faith. “I thank God for these chances to be heard, to have the potential to touch just a single lost soul and bring them to Christ,” Daly says.

About the Author: David Daly currently lives in England with his wife, Gay, where he spends his time sharing his testimony, studying Scripture, and engaging in his church community. Dawn Merrow is a freelance writer living in Nashville, Tennessee with her husband, Benjamin. To learn more about the book visit onewaytograce.com. To connect with the authors, please contact Alison Storm at media@emeraldhouse.com.