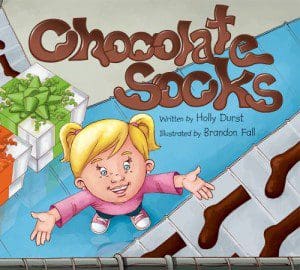 For immediate release: Reality star Holly Durst took her love for two things and turned them in to an adorable children’s book. Chocolate Socks (Ambassador International; March 2012; $14.99, hardcover) inspires young readers to dream big—something Durst is very good at! Durst appeared on ABC’s “The Bachelor” season 12 and in 2011 took home a $125,000 prize for winning the second season of “Bachelor Pad.”

The prize money meant little compared to what else she walked away with: LOVE! She met her fiancé Blake Julian, a South Carolina dentist, on the show. Blake ended up popping the question in front of cameras and their engagement aired during the show’s finale. The two are currently in the middle of wedding planning for their summer ceremony. “Two of the biggest things to ever happen to me are happening in the same year,” says Durst. “I’m achieving my dream of becoming a published author and I’m marrying the love of my life!”

Durst was born and raised in a small town in Ohio. After graduating from Walsh University she moved to Los Angeles where she discovered her love for writing children’s books. While living in LA, Durst managed a high end clothing boutique in Beverly Hills for five years. A producer spotted her at the store and asked her to be on ABC’s hit show “The Bachelor.” Three years after her unsuccessful quest for love on television, Holly was asked to come back for season two of “Bachelor Pad.” This venture was a lot more successful than the last.

To learn more about the author and her book Chocolate Socks, visit HollyDurst.com. For interview requests please contact publicist Alison Storm at media@emeraldhouse.com.