Ambassador International title The Brontes: Veins Running Fire was recently reviewed in The Official Journal of the Bronte Society. Below is a portion of this review, completed by UK Editor Bob Duckett:

The Brontes: Veins Running Fire is a story well told. It is lucid, clearly structured, factually accurate, set well in the context of its time, and provides good psychological insights.

The author’s motive is clearly stated and is pursued with vigour. Bingham reports that he was ‘stung into writing’ by ‘Toby Stephens, who brilliantly played Rochester in the [2006] BBC production, [who] stated that “where modern readers sometimes dislike Jane’s moralizing digressions as the novel’s narrator, this new adaption has relieved her of that.” I was aghas’. Bingham believes Jane Eyre ‘to be one of the most powerful pieces of literature ever written in defense of the sanctity of marriage. It is moralizing at its greatest and most creative level’ (p.15) Anne Bronte’s chapter, ‘The Cottage’, in Agnes Grey is also a fine moral piece of writing. Additionally, Nelly Dean in Wuthering Heights is a strong moralizing influence. On this stance the author is to be commended, not so much that one may (or may not) agree with his viewpoint, but that it was the viewpoint of the Brontes themselves. The Brontes had a strong evangelical Christian upbringing and the author clearly situates them in this context. At times the puritan evangelical background seems overdone, with digressions into the loves of like-minded Christian thinkers such as Charles Simeon and substantial quotations from the likes of Matthew Arnold and Robert Browning. Up to a point, this framing is a strength; it gives the reader the wider cultural context, the context with which the Brontes themselves were familiar and which informed their thinking.

Patrick’s early years in Ireland are well done with good background into the Society of United Irishmen, Betsy Gray (Ulster’s own ‘Joan of Arc’) and the rebels such as Patrick’s own brother, William Brunty. The character and civilizing influence of Thomas Tighe (‘the father of Irish evangelism’) is well contrasted with the general lawlessness of the early eighteenth century. Wesley was friend of Tighe, and there was a spiritual awakening with Lutheranism and Pietism which influenced the young Patrick. These Wesleyan and evangelical connections were strengthened with Patrick’s exposure to the influences of Henry Martin, Charles Simeon, William Wilberforce and the Clapham Sect. We are usefully reminded of the foundation of the British and Foreign Bible Society and the Church Missionary Society, both of which Patrick championed when he moved to the West Riding. We are also reminded, or possibly learn for the first time, that Patrick was offered a post in Matinique but he preferred to evangelize in the needy northern English cities.

Detailed attention is paid to Patrick’s poems and his prose writing – works often glossed over. They demonstrate Patrick’s idealism, his social conscience, and awareness of political events. The Cottage in the Wood is suggested as a seedbed of ideals for the later novels of Patrick’s daughters, with the anti Catholic sentiment in The Maid of Killarney having an influence Charlotte. The Haworth background is well drawn: Grimshaw, Whitfield, Wesley, the Countess of Huntingdon, and the controversy over Patrick’s appointment to the Haworth curcay. Bingham is good on using recent research to describe Haworth as an industrial and cultivated place – not the Gaskell caricature. He has a good understanding of local topography.

The early careers of Charlotte and Anne are well descried, with particular attention to their spiritual crises. ‘Patrick was right at the heart of the reforming evangelical movement’ and the theological niceties between father and daughters are well described. Bingham is sensitive on interpersonal relationships; in particular on the relationship between Patrick and Charlotte where, unlike some recent writers, he suggested Patrick encouraged Charlotte to ‘live a little’ in the early 1850s. Charlotte’s and Patrick’s position on social issues and their views on contempory intellectual debates are charted. Patrick’s work as an active social campaigner is frequently quoted while in 1854 both are found campaigning for Crimean War relief. The Christian message for the twenty-first century is spelled out in the novels: Jane Eyre’[…] is a novel which explores in detail the very nature of Christianity itself, particularly Christian morality’ (p.121) and Villette has a lot more morality in it than I ever suspected!

I enjoyed the read and found the evangelical standpoint refreshing and thought-provoking. ‘[T]he unimaginable fortitude that surfaces in a family facing sorrow upon sorrow, tragedy upon tragedy, is hugely inspiring’ (p.17) Indeed, this is a story well told. I recommend this book and congratulate the author on his initiative.

Ambassador International title Your Right Job Right Now is featured in the September/October issue of Business Black Box.The “Between the Pages” column writes this about the book: “Interesting, especially if you’re interested in finding a job where you truly belong, or even just looking to get a new perspective on the job you have.”

Ambassador International author Ruth Carmichael Ellinger released a new book trailer of her highly successful novels, The Wild Rose of Lancaster and The Wild Rose of Promise. Ruth’s third book, Sword of the Wild Rose, is expected to be released in early 2010.

Why Did You Choose Me?

Don’t miss out on the latest Ambassador International news!

In today’s world, it’s hard not to be involved in at least one social media website. At Ambassador International, we want to make sure we reach out to everyone! We are located on some of the top social media websites. Make sure you check out our pages to get the latest book information, helpful writing tips, giveaways, and much more!

Our number one source for finding information on our book giveaways! An astounding 1 in 5 people in the entire world on Facebook! Write on our wall and give us your latest thoughts!

In 140 characters or less, we tweet the latest details on book giveaways, author information, and ideas for Christian living. Providing inspiration in a couple sentences or less!

A new addition to our media outlets, we love to have Google Hangouts with our authors! This is a great way to connect one-on-one with your favorite authors and ask them questions!

Are you addicted to pinning? We have boards to provide inspiration with Christian living, links to book reviews, what our authors are up to, decorating with books and more! We love to share writing tips!

Check out our YouTube channel for book trailers, author interviews, and tips for publishing your own books. More videos to come!

Why Did You Choose Me? Endorsements

We are thankful for the great endorsements we received for Why Did You Choose Me? 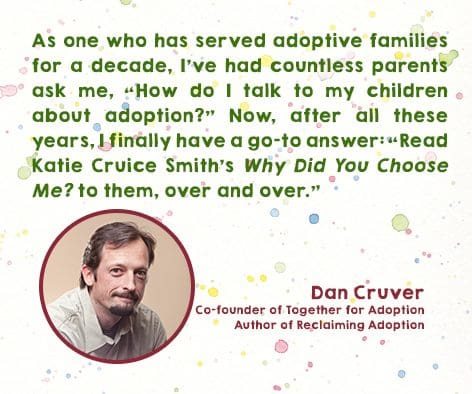 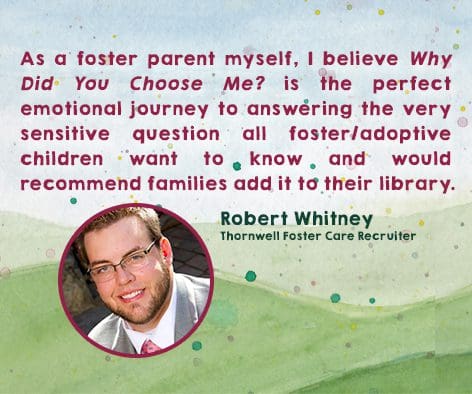