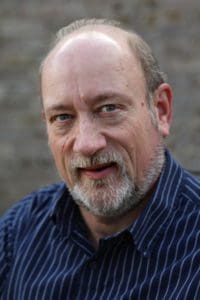 David Mathews was born in the small mid-western town of Friend, Nebraska, a community of 1100 people once listed in Ripley’s Believe It or Not for having the world’s smallest police station—a tiny tool shed previously used by highway construction crews. He grew up in small towns in Kansas and Indiana before settling in Indianapolis after college.
David describes himself as a big dreamer with an overactive imagination. Now living in Ohio, David and his wife, Donna, have six children between them, along with a son-in-law, daughter-in-law, three granddaughters, and two Boston Terriers. He enjoys home remodeling, woodworking, bicycling, camping, and writing. He also serves in their local church, loves being a grandfather, and never grows tired of watching Andy Griffith reruns.