Home » Books » To Comfort a King 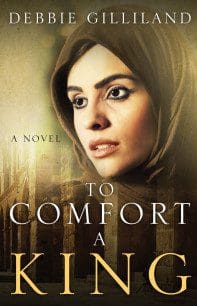 Torn from the comfort of her small village, Abishag is thrust into a world of unfamiliar customs, royal expectations, and palace intrigue.

When Abishag leaves her home to fulfill the commission to comfort King David during his final months of life, she leaves behind a deaf sister, a small brother, and a father who is still grieving the death of his wife.

Also left behind is Abishag’s betrothed, Joseph, who has already waited many months to claim his bride. Now, he must wait until Israel’s king no longer needs her.

Abishag is greeted suspiciously by the king’s concubines, warmly by Queen Bathsheba, and reluctantly by King David himself. Adonijah, the king’s son, is bitter over his father’s choice of Solomon as Israel’s next king. He determines to ruin Abishag to prevent her from being given as a prize to Solomon at their father’s death.

Suffering personal losses, as well as scorn from much of the royal court, Abishag begins to question God’s goodness in placing her in the king’s service.

Can she find someone there who understands that one who comforts the king is in great need of comfort herself? Will Abishag’s time with the king end in despair or joy?

Debbie Gilliland began writing in high school, when daily journaling was an assignment. She served as the editor of her high school weekly newspaper and her school yearbook. Later, she attended college in Iowa, where she earned an accounting degree. When not writing, Debbie enjoys walking, riding the GoldWing with her husband, and entertaining the most delightful little people in the world—her grandchildren.