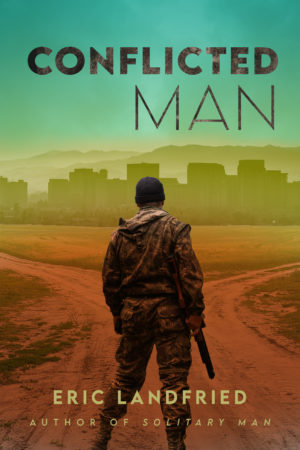 In a world gone mad, is God still in control?

In this sequel to Solitary Man, Doyle wants to know what’s on the other side of the fence.

Determined to discover the truth, Doyle sets out on what he believes is a lonely quest, only to find out along the way that God is still at work, and there are still people who believe in Him.

While Doyle struggles with his new faith in Christ, he has his eyes opened to the darkness of this world and learns to set his sights on heavenly things while fighting the evils that threaten the people and world that he loves. And along the way, Doyle might finally solve the conflict in his soul and find that he does need others after all.

Eric Landfried was thirteen years old when he realized he was a writer. Once he had this realization, he grabbed a spiral notebook and began filling it with all the stories bumping around in his head. He was young and inexperienced, and therefore terrible, but the ideas kept coming and he kept improving as a writer. As a shy and withdrawn kid living in West Virginia, writing became the best outlet to express himself, and he exploited it as much as he could. As an adult, he wrote less frequently, usually due to his procrastinating nature, but the ideas never went away. Many of them are still with him, waiting to be introduced to the world.
Eric now lives in New Hampshire with his wife Kristen and son Nathan, and he is looking forward to sharing the contents of his brain with everyone, starting with Solitary Man, and now its sequel, Conflicted Man.

Into the Unknown: Seven Short Stories of Faith and Bravery