Home » Books » Women of the Frontier 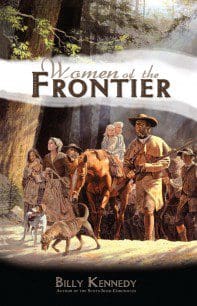 Women of the Frontier

American frontier women of the 18th century were an extraordinary people whose contribution to the creation of the United States is one of the most enduring stories in history.

The gallant women of the frontier have never been given the full credit they deserve for settling with their families in an uninhabited wilderness.  Women of the Frontier places on record the notable achievements of these heroines.

Northern Ireland author/journalist Billy Kennedy, in the eighth of his Scots-Irish Chronicles, gives recognition to the women whose lot was far from glamorous in the bleak and lonely frontier territories. They faced personal hardships and tragedies in hazardous conditions. While the men toiled arduously from dawn to dusk to lay down a stake in the New World, the women were the cornerstones of the home, the church, and the wider community.

Women had to be strong, self-reliant, resourceful, and loyal to their families. Through their honest and dedicated endeavours on the frontier, a democratic and decent civilization emerged which now extends across the great American expanse from the Atlantic to the Pacific.  Indeed, the women of the American frontier deserve our honor and admiration.

Billy Kennedy has now written eight books in the popular Scots-Irish Chronicles which focus on the 18th century American frontier settlements. This latest work, Women of the Frontier, vividly highlights the outstanding contributions and enormous sacrifices made by hardy and courageous womenfolk (not only of Scots-Irish origin, but also of other European emigrant ethnicity and native American culture). Life was not an easy load for these frontier woman, but possessing unusual character and fortitude, most of them managed to surmount the adversities that came their way on a daily basis. Billy Kennedy lives in Co Armagh, Northern Ireland, and has been a leading journalist there for the past 30 years. He has occupied the roles of Religious Affairs and Cultural Correspondent, Political Correspondant, Assistant Editor, and News Editor with the Belfast News Letter (the primary morning newspaper in Northern Ireland and oldest English-written newspaper in the world). Billy has also worked for other media outlets in Northern Ireland and in other parts of the United Kingdom. On his regular visits to the United States, Billy lectures on the subject of the Scots-Irish diaspora at universities, colleges, historical and genealogical societies and public authorities in cities and towns of the south eastern American states. His other main interests are soccer and American country music. Billy is married and has one fully-grown daughter.

For Christ and Country: A Biography of Brigadier General Gustavus Loomis

Our Most Priceless Heritage: The Lasting Legacy of the Scots-Irish in America