For immediate release: Tooth decay is the most common and most preventable disease in children, according to the Academy of General Dentistry. February is Children’s Dental Health Month. In an effort to promote children’s oral health routines within international households and families, authors Ashley Grisham and Gary Kersey Jr. announce the release of their children’s book Everyone Smiles (Ambassador International; February 2015; $14.99, hardcover). 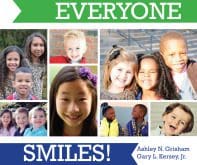 photography of children from a diverse range of backgrounds and cool- catchy-rhymes, Everyone Smiles is a fun, interactive and educational book. An avid volunteer with organizations providing free dental services to impoverished families, Gary says he has seen firsthand the importance of educating children about the necessity of brushing and flossing. “It can be a frustrating task for parents,” admits Gary, “but we hope this book will be a tool that can make these critical lessons easy for kids to learn.”

Everyone Smiles features children from diverse backgrounds, which was key for Ashley, the daughter of a dentist and dental hygienist. “A smile can break through so many cultural and language barriers,” says Ashley. “Being confident of your smile can lead to confidence in other areas of life.” The co-authors’ platform, the Kersey Kids Club, focuses on supporting health educational resources for young children and families and the power of a  smile.

About the Authors: Born and raised in North Carolina, Gary Kersey earned his undergraduate degree with honors from Morehouse College. He continued his education by working towards a Masters degree in Physiology & Biophysics from Georgetown University. Gary is an aspiring dental professional hoping to combine his background in the sciences and modern languages to elevate dental care in underserved areas.

Ashley Grisham, a native of San Diego, CA, grew up as the daughter of both a U.S. Navy Captain dentist and a dental hygienist. A graduate of Spelman College, Grisham earned her Bachelor of Arts in International Studies and holds a minor in Chinese language. Ashley is currently finishing her last year at Georgetown law school and upon graduation will join the law firm of Paul Hastings LLP.

For interview requests or to request a review copy of Everyone Smiles please contact publicist Alison Storm via email at media@emeraldhouse.com.