What does Christianity Today’s Christmas Gift Guide have to do with Ambassador International? 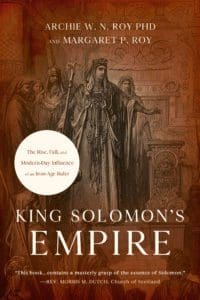 The incredible King Solomon’s Empire by Archie and Margaret Roy is on Christianity Today’s gift guide and we’re excited to share it with you!

If there’s someone on your list who loves history and the Bible, and wants to dig deeper into the wisest man who ever lived – this is THE BOOK!

But don’t just take our word for it. Check out what Christianity Today has to say about King Solomon’s Empire: The Rise, Fall, and Modern-Day Influence of an Iron-Age Ruler.

“King Solomon is known as the wisest and richest man to have ever lived, but who was this man really? Even though we read his words in the Bible, this man who was the son of ‘the man after God’s own heart’ remains a mystery to this day. Even his death is veiled in conspiracy theories. How could a man who was granted his greatest wish by God Himself be so enamored with the pleasures of this world—hungry for sex, power, and more wealth?”