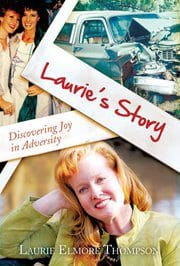 For immediate release: Laurie Elmore Thompson should be in a wheelchair—in fact, she should be dead. At 14 a drunk driver smashed into the car Laurie was riding in, throwing her from the vehicle and into a wheelchair. Laurie dipped into depression, devastated by the idea of a future filled with struggle. Eventually Laurie found triumph through the Lord, but that didn’t mean the end to adversity.

An encounter with a drunk doctor, a major house fire and other key events have brought Laurie even closer to the Lord as she demonstrated Phil. 4:13, “I can do all things through Him who strengthens me.”  “Adversity is a part of everybody’s life. Instead of wallowing in self-pity, I want to be positive and see things through God’s perspective,” explains Thompson. “We just need to turn over those difficulties in life and rejoice in them because we don’t have to go through them alone.”

Now she’s taking that message to the world in a new book, Laurie’s Story: Discovering Joy in Adversity. “It’s a book everyone can relate to because we all deal with difficult things in life,” says the Anderson, South Carolina resident. Thompson hopes to encourage others through Laurie’s Story, by explaining a concept she calls “The Adversity Effect.” “I believe it’s the tough times in life that challenge us,” she says. “We can allow difficult trials to be a conduit for growth.” Published by Ambassador International, the book will be available online and in stores by mid-September. Learn more at www.lauriethompsonministries.com.