For immediate release: Joe Cannon devoted nearly 65 years of his life sharing the Gospel across some of the toughest terrain, to the most unloved, unreached people in the world. Cannon’s efforts have inspired countless others including author and missionary David Sitton. In Hard Fighting Soldier: Joe Cannon: 65 Years of Pioneer Gospel Exploits for the Glory of God (Ambassador International; January 2015; $13.99, paperback) author David Sitton inspires and encourages readers through the incredible story of his missionary mentor. 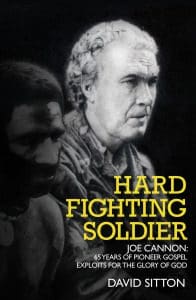 Cannon did not shy away from sharing the Gospel to even the most challenging peoples. He invested into lives throughout Japan, Okinawa, Papua New Guinea and Ukraine, often utilizing unconventional methods that earned him a reputation as a courageous fireball. “The gospel doesn’t carry itself along its own merry way,” writes Sitton. “When it runs, it runs on our legs. God’s messengers are called upon to forcefully accelerate the gospel into hazardous situations, and front line sol­diers for Christ are guaranteed to be busted up and bloodied in the fight.” Joe Cannon and his wife exchanged leisure, physical safety and financial security for the advancement of Christ.

Hard Fighting Soldier begins with Cannon’s first missionary assignment, which carried him to Japan in the wake of World War II. Answering an urgent request for the deployment of 1,000 missionaries to help fill the “spiritual vacuum” created by the devastation of war, Cannon and his new wife traveled thousands of miles to work with the poorest cave dwellers they could find. Over the years Cannon utilized a wide variety of ministries and methods to share the Gospel including Christian kindergartens, orphanages, retirement homes, sewing and English language schools, radio preaching, youth camps and more. Despite exposure to plagues, disease and death the couple’s unshakeable trust in God and resolute ambition to advance the Gospel never wavered. “Joe’s rallying call for pioneer spearheads to boldly go into all the world and preach the gospel was exhilarating,” recounts Sitton. “Thousands were roused by that challenge, and hundreds have found their way to missionary frontlines because of his influence.”

About the Author: In January, 2006 Sitton and his wife Tommi  founded their second ministry, The Center for Pioneer Church Planting which is dedicated to recruiting, training and launching pioneer church planters into the far-flung regions where Christ is still unknown. Hard Fighting Soldier is Sitton’s third book, following the popular title, Reckless Abandon: A Gospel Pioneer’s Exploits Among the Most Difficult to Reach People’s.