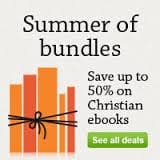 Are you looking for something to keep you on the “edge of your seat” this summer? Vyrso.com is offering the “Edge of Your Seat Bundle,” a great limited time offer on three of our fantastic ebook titles for only $16.44. All three of these great stories of action and mystery will keep you guessing right up to the very end. Make sure you act fast and add these great books to your collection.

Blue Dollar: With the world teetering on the brink of economic disaster, Randy Grant thinks he has uncovered a secret plot that threatens to bring down everything around him. Can he avoid both the enigmatic Satanist cult, the Thirteen, and the United States government long enough to prevent the coming catastrophe?

Alana Candler, Marked for Murder: Alana Candler know she’s on someone’s hit list, but she doesn’t know why. Finding help in the form of Jaydn Holbrook, an old family friend and now rich businessman, will she be able to figure out why her life is at risk? Only with the help of her newfound ally will she be able to make sense of the chaos around her.

The Unreconciled: The United States has been struck by a Christian Holocaust, leaving the country under the rule of a vicious Caliph. Denisa Graceon, an archeologist working for the Church, is on the hunt for Christian relics. With the help of an unlikely ally, she discovers a secret group called the Unreconciled—America’s last Christians.