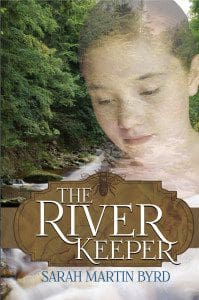 For immediate release: Witnessing her family die in a flood could have been enough to ruin Callie Mae McCauley, but she doesn’t let being orphaned at the age of eight destroy her tender spirit. The River Keeper (Ambassador International; October 2014; $14.99, paperback) follows young Callie as she navigates the stream of life. Through gentle ripples and vengeful rapids, she finds healing living with her grandmother in the Blue Ridge Mountains.

Set along the banks of the New River in North Carolina in the 1940s, author Sarah Martin Byrd artfully writes about the rugged hillsides and idyllic meadows with familiarity that can only come from someone who has called this place home. Believed to be one of the oldest rivers in North America, the author has woven its natural history into the story of The River Keeper. “I have probably done more research on this one story than I’ve done on all my others,” explains Sarah, who has fished, swam and paddled through miles of the river. “The New River is so rich in history and folklore.”

Based on actual events, The River Keeper tells the story of the 13-year battle to protect the New River from development. In 1965 Appalachian Power filed an application with the Federal Power Commission for permission to build a two-dam hydroelectric and pumped-storage facility. This project would have flooded over forty thousand acres of rich bottomland, displacing as many as 3,000 people, destroying hundreds of cabins, churches and cemeteries and one of the most important archeological areas in the eastern United States.

The River Keeper is Byrd’s third project with Ambassador International. In 2012 Ambassador International published Byrd’s novel The Color of My Heart, which pushes readers to contemplate whether they believe heart matters more than skin. In 2013 Byrd released The Manger Mouse, a touching children’s book about a tiny mouse’s big role in the Christmas story.

About the Author: Sarah Martin Byrd is a graduate of The Institute of Children’s Literature. She is a published novelist, newspaper columnist, blogger, and former Advertising Manager for a regional newspaper. Sarah loves sharing her life story with children of all ages. She speaks at schools, book clubs, libraries and book festivals. Sarah lives at the foothills of the Blue Ridge Mountains in North Carolina with her husband of 38 years. Her only daughter and grandchild live close by. When not creating new stories she loves camping, canoeing, fishing, her daily walks, and spending time with her family.

To receive a review copy of The River Keeper or to connect with the author please contact publicist Alison Storm by email at media@emeraldhouse.com.