For immediate release:There are fewer than 100 full-time film buyers in North America, but without them some 40,000 theater screens would be blank. For more than two decades Larry Vaughn served as the liaison between Hollywood studios and the movie theaters he represented. In his new book Hollywood’s Chosen: An Insider Shares His Story(Ambassador International; September 2014; $16.99, paperback) Vaughn is pulling back the curtain on a largely undocumented aspect of the film industry. 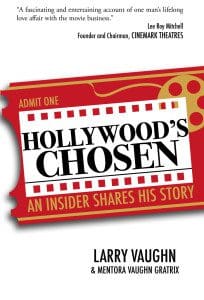 Through a cast of characters that includes celebrities like Sylvester Stallone, Michael J. Fox and Clint Eastwood, Vaughn describes the drama and delight that accompanies being one of Hollywood’s Chosen. Vaughn began working at a movie theater when he was 15, earning just $.50 an hour. As a child growing up in a poor, single-parent household Vaughn dreamed of a life filled with movie stars and thrilling plots, a fantasy that was fulfilled when he became the vice president and head film buyer of a theater circuit located in one of the top movie markets in the country. Vaughn’s job consisted of meetings with producers, directors and actors; reviewing scripts; and watching yet-to-be released movies from his own private screening room.

After becoming a Christian later in life, Vaughn faced a difficult decision that put his career and faith at odds. At the pinnacle of his career Vaughn made the difficult decision not to show a certain film, a controversial movie that made national headlines. With a foreword from Movie Tavern President and CEO John Hersker along with endorsements from Hollywood icons like Bruce Snyder and Bert Livingston of 20th Century Fox as well as Mark Gaines from Universal Pictures Distribution, Hollywood’s Chosen is set to be a blockbuster hit.

About the Authors: Larry Vaughn was raised in Greenville, South Carolina by a single parent. His humble beginnings didn’t stop him from dreaming about

a career in the Hollywood entertainment industry. Larry started ushering in his neighborhood movie theater and climbed the corporate ladder, where he later became Vice President/Head Film Buyer for a premier theater circuit in one of the top movie markets in the country. Today, Larry lives in South Bend, Indiana with his wife.

Mentora Vaughn Gratrix was born in Miami, Florida, and later lived in Myrtle Beach and Greenville, South Carolina. She and her husband Jeffrey, currently live in South Bend, Indiana with their two daughters.

To connect with the author or to request a review copy of Hollywood’s Chosen please contact publicist Alison Storm at media@emeraldhouse.com.