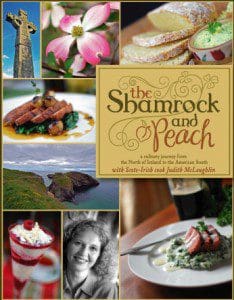 For immediate release: Judith McLoughlin is looking at southern cuisine through Irish eyes. Her new cookbook, The Shamrock and Peach: A Culinary Journey from the North of Ireland to the American South, (Ambassador International; November 2011; $29.99/hardcover) combines fresh produce of the South with age-old Irish techniques to create a new fusion that melds the best of both worlds: Georgia pecans in a traditionally Irish trout dish; peaches with an Ulster favorite, rhubarb; or whiskey flavors with Georgia-grown chicken.

Judith’s romance with hospitality and food began around the County Down dinner table of her grandmother. It was a time when the dinner table was the heart of a home, the life of the family.  She still maintains a passion for farm-fresh, natural food, a love sparked in Ulster where the roaming hormone-free livestock eat lush green grass, fed by the rain-soaked Irish climate. She’s lived in Georgia for more than a decade, an area just as agriculturally rich as her homeland.

The Shamrock and Peach hits shelves in November, but Judith already shares her fusion regularly through cooking classes and demonstrations in the Atlanta area. She also exclusively imports and sells some of her favorite Irish products through her business, The Ulster Kitchen. Judith loves speaking on topics including:

One of the desserts served on the Titanic, which was built in Belfast near Judith’s home, is featured in The Shamrock and Peach. April 2012 marks the 100th anniversary of the Titanic’s fateful maiden voyage.

This fresh take on southern cuisine will impress palates at dinner tables here and across the pond. Learn more at www.shamrockandpeach.com or email Alison Storm at media@emeraldhouse.com to connect with Judith.