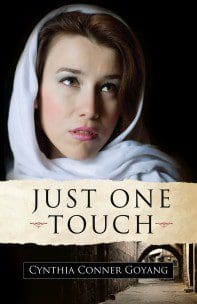 FOR IMMEDIATE RELEASE:  In her debut novel, Just One Touch (Ambassador International; January 2013; $11.99, paperback), author Cynthia Goyang relates the story of the woman who pushed through the crowd in order to touch Jesus’s garment. Now a certain woman had a flow of blood for twelve years and had suffered many things from many physicians.  She had spent all that she had and was no better, but rather grew worse.  When she heard about Jesus, she came behind Him in the crowd and touched His garment.  For she said, “If only I may touch His clothes, I shall be made well.” – Mark 5:25-28

Cynthia Goyang takes this short Bible story and creates a story of life and death, hope and salvation, and the power of faith.  Using her imagination, Goyang tells the story of this woman’s life prior to her encounter with Jesus and how it affected her life afterward.  “ I hope that readers will be encouraged to replace their fear for faith and reach out to touch Jesus Christ the Lord,” says Goyang. “My beginnings, like Sapira’s, were quite humble.  I grew up in a poverty-stricken, crowded household.  There were complete Colorado winters that we endured without electricity in our house.  But also like Sapira, my life changed dramatically when I surrendered it to Jesus.”

When a handsome, rich, young man asks to marry the poor potter’s daughter, Sapira believes that she is the luckiest girl in the world.  However, her life soon begins to unravel and she loses not only her family and wealth, but her health as well.  After suffering for years from a steady loss of blood, Sapira has all but given up hope until the day she hears about a man named Jesus.

About the Author:  Cynthia Goyang is a Christian, wife, and mother.  She and her husband Tony have three sons and enjoy spending time with their three granddaughters.  She was born and raised in Denver, Colorado as the second to youngest of ten children.  Cynthia met her husband while at school in Oklahoma and now resides in the West Texas town of Midland.  She is an avid reader and loves to use her pencil to illustrate the Lord’s principles.  Just One Touch is her debut novel.

To learn more about the author and her book, Just One Touch, visit her at cynthiagoyang.com or facebook.com/cynthia.goyang.  To connect with the author, please contact publicist Alison Storm at media@emeraldhouse.com.