For immediate release: In the length of time it takes to recite the Lord’s Prayer twice, the ground shook violently, lurching beneath Melanie Wright Zeeb’s feet. Panic and terror seized her as the earth roared, windows shattered and babies screamed. Beauty From Ashes: An Eyewitness Account of Haiti’s Tragic Earthquake (Ambassador International; May 2014; $15.99, paperback) tells the story of the 2010 disaster from the eyes of a young woman and the 152 orphans in her care. 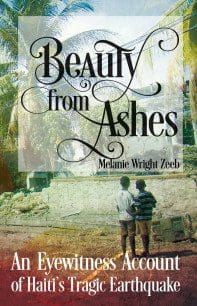 Miraculously no one at God’s Littlest Angels orphanage, situated halfway up a mountain a few miles outside Port-au-Prince, was injured in the quake. Even the orphanage’s buildings sustained very little damage, unlike the overcrowded nearby capital city, which was largely destroyed. “There was a mountain that blocked the view of Port-au-Prince,” recounts Zeeb, “but a giant cloud of dust could be seen rising from the city.”

Mothers and fathers waiting for adoptions to be finalized began to panic. Were their children safe? Would their adoptions be jeopardized? Were legal documents now buried under rubble? Being one of the few places in Haiti that still had Internet access and satellite phone service, Zeeb and her team at GLA suddenly became a source of information for major news outlets including NBC, Fox News, CNN, the BBC and more. Zeeb’s disaster photos were sent to news agencies worldwide to show people the extent of devastation. “Overwhelmed does not even begin to describe how we felt,” writes Zeeb. “We had no sense of future, no hope that things would soon be better or return to normal. The only time that existed was that very moment.”

Less than three weeks after the disaster, more than 90% of GLA’s orphans were united with their forever families, something no one would have dreamed possible. “Haiti will never be what it was before,” says Zeeb, “neither will anyone who lived through this experience.”

About the Author: Melanie Wright Zeeb wrote her first stories as a child, but her love for Haiti didn’t come until she visited the island nation in 2004. She went back as often as possible before finally moving there in 2008 to work at God’s Littlest Angels. After the events of this book, Melanie returned home to Indiana, where she now lives with her husband.

To receive a review copy of Beauty From Ashes or to connect with the author please contact publicist Alison Storm by email at media@emeraldhouse.com.