Exclusive for this week’s sale is the entire Appalachian Roots series by Janice Cole Hopkins!  For today only, you can purchase Cleared For Planting, Sown in Dark Soil, and the newly-released  Uprooted by War each for only 99¢!  This is a one-time opportunity, and after today each book returns to their standard price of $5.99.  Don’t miss out on this deal!

Cleared For Planting: Living in the Appalachian Mountains in 1804 takes a strong person, and the unexpected can be lurking just around the corner. Emma has high hopes when her family moves to the North Carolina mountains. Her father appears to have finally quit drinking, and he plans to settle their family once and for all near the Linville River. Here Emma meets Edgar Moretz, an intelligent, passionate, and godly young man. Things are looking up for her, but when she is captured by a Cherokee raiding party, Emma’s problems have just begun. Years later, Clifton has finally finished his medical training and plans to spend some time at his family’s mountain farm until he can decide his next step. He also hopes God will send him a special woman to become his wife. But when she arrives unexpectedly, he finds that the road to happiness is not always smooth. BUY NOW

Sown in Dark Soil: The Appalachian Mountains are a beautiful place for life and love—but they can prove harsh and treacherous to the unexperienced. After the death of their father, Ivy and Leah Morgan are suddenly thrust into unpleasant, arranged marriages by their mother. Ivy, however, has other plans. Having fallen in love with Luke Moretz, Ivy is insistent upon running away to Luke’s farm in the Appalachian Mountains—far from her home and her mother’s disapproval.
Convincing her sister to come along, the Morgan girls leave town with Luke. Along the way, feelings between Ivy and Luke become strained as Ivy’s true personality and distaste for the mountains begin to show. Luke must face following his growing attraction to Leah or keeping his promise to Ivy. Meanwhile, Leah can’t help falling for all the things about Luke that her sister seems to dislike. Mixed emotions and the testing of relationships lead to dangerous and unfortunate circumstances that put any chance of future happiness at risk. Will this journey bring the sisters closer than ever, or drive them further apart than they could have ever imagined? BUY NOW

Uprooted by War: When brother must fight against brother, tragedy and terror become all-too-familiar visitors. The fate of a nation, and a family, hangs in the balance.
It’s 1862, and the Civil War has arrived at last in Appalachia. Fearing that he will be drafted by the Confederacy, Luke Moretz leaves his farm and his wife, Leah, behind to join the Union. Although he loves the South, Luke can’t abide slavery. However, Luke’s brother-in-law and best friend, Lawrence, disagrees and will fight for the Confederacy. How can Luke keep his faith when faced with 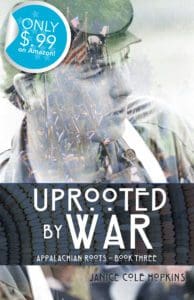 insurmountable obstacles and horrendous conditions amidst the turmoil of war? Meanwhile, at their mountain farm, Leah is weighed down with the responsibility of now taking care of the family. Scavengers, raiders, and bushwhackers are always a threat in the Appalachians, but deserters and slave catchers pose new dangers. Hawk, the Cherokee brave who has long loved Emma, helps ease Leah’s burdens, but nothing can soothe her heartache. Plagued by fears of a husband lost to war, she knows she must lean on God now more than ever, but hope begins to run scarce in these difficult times. BUY NOW