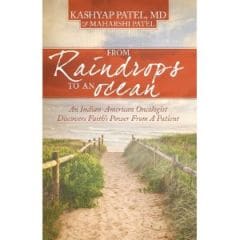 For immediate release: Nationally renowned oncologist Dr. Kashyap Patel, MD has treated thousands of patients over the years, but none quite like Anne Sanford. Despite having had a number of patients who fought cancer with grace and bravery, in Anne he found such a remarkable spirit that it affected his own outlook on medicine and his religious views.

Once a Hindu, a near death experience prompted Dr. Patel to investigate what gave some patients genuine acceptance of suffering. After delving into his meticulous patient journals, he found his answer in Anne, the wife of a large Presbyterian Church pastor in Rock Hill, South Carolina, whose astonishing faith during virulent leukemia awakened his own faith. “I found her story so touching that with the blessing of Anne’s family, I decided to share it with the entire world so that all could feel the wonder Anne inspired in those around her,” explains Dr. Patel.

Dr. Shelton Sanford, Anne’s husband, pastors Westminster Presbyterian Church, a position he’s held for 25 years. “In the providence of God, she was called to suffer with an aggressive form of leukemia,” says Dr. Sandford. “Upon Anne’s diagnosis, her greatest desire was to be a faithful witness to her Lord and Savior Jesus Christ. Anne’s witness has continued long after her death as is evident by the content of this book.”

According to the Leukemia and Lymphoma Society, more than 43,000 people developed leukemia in 2010 and, like Anne, it’s a battle many do not win. Raindrops to an Ocean: The Amazing Last Days of Anne Sanford (Ambassador International; October 2011; $12.99/softcover) explains the profound, eternal impact a pastor’s wife had on her doctor.