After a long winter and an already- difficult year, spring has finally sprung. And with it – new books for all to read.

Here’s our April book list. We hope everyone can find one, two, or more to add to their “to be read” stack! 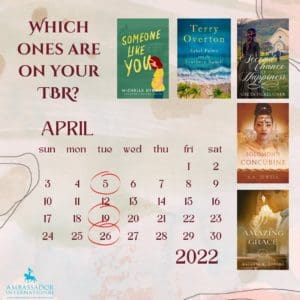 From the pen of Michelle Dykman comes a Young Adult novel about teen pregnancy, choosing life, and redemption.

Candice Hillman is on the precipice of completing her senior year at Bethel Private School. Although her parents are mostly absent from her life after their divorce, Candice finds support in her housekeeper, Mrs. Potter, and her boyfriend Brad. When a night of too much partying leads to a pregnancy, her carefully-constructed world comes crashing down forcing Candice to relook at her life and the choices she makes regarding her baby.

Someone Like You is a heartfelt look at the struggles of teenage pregnancy and takes readers on a journey of acceptance, forgiveness, and the wonders of God’s grace with a little bit of romance thrown in along the way

Sabal Palms and the Southern Squall

From award-winning author, Terry Overton, comes a story of a supernatural squall and those who chose to ride out the storm.

Elaine Smith lived in the small coastal town of Sabal Palms long enough to know when to worry about a squall and when to simply close the windows and wait for it to pass. This one would be significant. It would be significant in terms of damage, but that was to be expected. What no one expected was the profound effect it would have on the lives of people from the Texas coast to New York City. Positive qualities of humanity are often displayed during times of natural disaster.

But a supernatural power had attached to this storm and subsequently worked within the hearts of the most needy, the most lonely, and the most sinister. The lives of four delightful women, a homeless teen, a rebellious son, a grieving lover who is at the bottom, a son who lost his faith, and a hired murderer are all intertwined in the aftereffects of a Category 3 hurricane thanks to a few passages written by one determined woman.

From the talented Greta Picklesimer comes a love story about second chances and the power of standing for what is right.

After Catherine Reed’s husband dies in a tragic logging accident, Catherine and her four-year-old daughter, Clair, move home with Clair’s mother and brother in order to accept a new position as the teacher for the town’s one-room schoolhouse. But Catherine carries a dark secret that she hasn’t even shared with her mother. Will she ever find forgiveness?

Samuel Harris has suffered his own loss, losing his wife and unborn child over a year prior. Although he is the town’s preacher, he struggles to trust God, blaming God for allowing him to be absent when his wife died. The guilt has burdened him ever since. But when his old flame Catherine Reed comes back to town, he wonders if they can find healing together.

Catherine believes that anyone who wants to learn should be allowed to learn, but she is quick to find a town divided on that issue. As she and Samuel set out to change people’s minds in a post-Civil War era, they find themselves drawn to each other over and over again. As they join together for the same cause, could they also find a Second Chance at Happiness?

From the desk of Sara A. Jewel flows Solomon’s Concubine, a historical and biblical fiction novel about the women in King Solomon’s harem, and one girl’s journey from ordinary Jewish girl to glorified concubine.

Nalussa is a simple Jewish girl, living with her family in a small town a day’s travel from Solomon’s kingdom. When a strange man meets her one day at the town well, Nalussa suddenly finds herself whisked away from all that she wants and desires to fulfill the lusts of a king she has never met. But one word of outcry can lead to her family’s harm and her own disgrace and removal from society.

While giving in to her new life at Solomon’s palace, Nalussa still holds onto hope that God will rescue her. When the king suddenly dies, the kingdom is in turmoil over who will be king next. Could this be her opportunity to escape? But where will she go, and will anyone want the king’s concubine?

S.A. Jewell looks at life in Solomon’s harem through the eyes of a concubine, taking the reader on a quest through Scripture to see a different side to the king who was given great wisdom and wealth from the one true God. Did Solomon die outside the will of God? And who is the mysterious woman he writes to in Song of Songs?

From the pen of Malanya M. Donaho…

When Dr. Sam Gray is sent to Africa as a volunteer physician, he is counting down the days until he can go home again. During a trip to the local school to take care of the students, he runs into the Cloverdales, a missionary family determined to win every soul in Africa to Christ. While fun-loving, brightly dressed Esther Cloverdale befriends him from the start, her more serious twin sister, Grace, is not as easily won over by the agnostic doctor. And Dr. Sam is convinced all their father, Thomas, wants to do is convert him.
Try as he might, Dr. Sam can’t seem to resist the family and finds himself being pulled into their midst again and again. As he battles his own beliefs, Dr. Sam begins to find that maybe he’s in need of a Physician as well, but Who will ever be able to heal his hardened heart?
Grace Cloverdale has only one purpose—to serve God. She has determined she will only fall in love with a man who is strong in his faith. So when she meets Dr. Sam Gray, she has no interest in pursuing anything other than a professional relationship. But the more time she spends with him, the harder she finds it to keep her resolve. Will she give in to temptation and fall under the charming doctor’s spell? Or will she remain faithful to her God?
Amazing Grace answers the questions so many people have—what’s so amazing about grace?