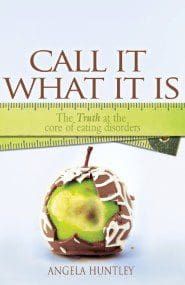 For immediate release: Angela Huntley can’t remember a time in her childhood when she was happy with her appearance. In fact, she hated the way she looked. This disgust with her appearance pushed her into a spiral of laxative abuse and bingeing. “I was worshipping diet, exercise, and body image,” she says. “I was putting my desire to be thin before Christ.” She writes candidly about her agonizing obsession with weight in her new book, Call It What It Is: The Truth at the Core of Eating Disorders.

In the US, up to 24 million people of all ages and genders suffer from an eating disorder such as anorexia, bulimia and binge eating disorder. Eating disorders have the highest mortality rate of any mental illness. Those shocking statistics from the National Association of Anorexia Nervosa and Associated Disorders (ANAD) don’t surprise Angela. “It’s a serious epidemic that’s growing fast,” she says. “But I overcame it and I know others can too.”

In Call It What It Is, Huntley wants readers to ponder the question “What is lord of your life?” Addictions can come in many forms, not just eating disorders. But Angela believes these strongholds can be broken when we surrender to God.

Angela resides in Kalamazoo, Michigan with her husband Chad and four sons. She received her degree in Biblical Studies from the Riverside Bible Institute and is currently on staff at Riverside Church in Three Rivers, Michigan. Published by Ambassador International, Call It What It Is is set for a July 20, 2011 release.