We’re counting down the days until Christmas with a progressive sale. Each day we’re adding a new Christian novel to the sale. That means the closer we get to Christmas, the bigger the bargain!

Day 2: From Dishes to Snow by Kathy M. Howard. 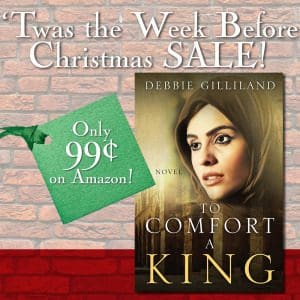 Check back tomorrow for another incredible deal on a great read from Ambassador International!

For 24 hours we’ll be offering one of our new fiction releases for just 99¢! Pick up Debbie Gilliland’s new novel To Comfort a King for less than a buck for the Kindle or iOS devices during our one-day sale event. After Thursday the price will go up to $2.99 through the weekend and then it will return to regular price. If you need a great novel to read, check this one out! The book already has several 5-star reviews on Amazon including this one: 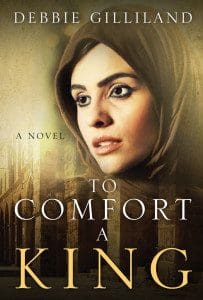 “I had never paid any attention to the mention of the young Shunamite girl in I Kings 1:3-4. The story comes alive with great character development in a biblical setting. Enjoyable read that ended too soon!”

Synopsis: When Abishag leaves her home to fulfill the commission to comfort King David during his final months of life, she leaves behind a deaf sister, a small brother, and a father who is still grieving the death of his wife. Also left behind is Abishag’s betrothed, Joseph, who has already waited many months to claim his bride. Now, he must wait until Israel’s king no longer needs her. Torn from the comfort of her small village, Abishag is thrust into a world of unfamiliar customs, royal expectations, and palace intrigue. She is greeted suspiciously by the king’s concubines, warmly by Queen Bathsheba, and reluctantly by King David himself. Adonijah, the king’s son, is bitter over his father’s choice of Solomon as Israel’s next king. He determines to ruin Abishag to prevent her from being given as a prize to Solomon at their father’s death. Suffering personal losses, as well as scorn from much of the royal court, Abishag begins to question God’s goodness in placing her in the king’s service. Can she find someone there who understands that one who comforts the king is in great need of comfort herself? Will Abishag’s time with the king end in despair or joy?