My wife and I are interracial. Angel is African-American and I’m Caucasian. We have two adult sons and a younger daughter.

My wife and I have been in a Christian band called “First Light” since 1997. First Light plays both contemporary Christian and traditional Gospel styles, cover tunes as well as originals. We perform songs in other languages, including Spanish and Hebrew. Angel and I were asked to join the band by its leader, who is a guitarist, singer and songwriter for many of our original songs. First Light has been like a second family to us. We are also one of two interracial married couples in the band. 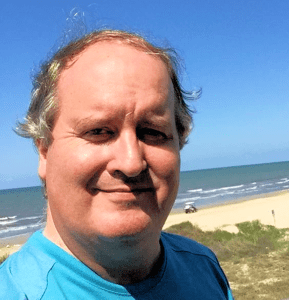 From 1997 to 2015, I ran a not-for-profit organization called the International Size Acceptance Association (ISAA). I created ISAA with the help of some very dedicated people. The organization’s purpose was to educate the public about size/weight-related issues (self-esteem, positive body imagery, fitness at any size and how to make healthy food choices) and to alert the public about weight-based discrimination. ISAA even created a holiday called “International Size Acceptance Day” and had it proclaimed by the City of Atlanta, Georgia on April 25, 1998 and 1999 and in Austin, Texas in 2003. ISAA educated the public through its website, email lists, an e-zine and two different podcast shows between 2002 and 2010. And though ISAA was non-political and not overtly religious, I did run the organization as a Christian man. The Lord put that cause on my heart and helped me run the organization. With His help, ISAA reached people all over the globe and offered kindness and hope. I shut down ISAA in 2015 for two reasons: the internet had changed with the rise of various social media, so people became less inclined to rally to a cause; and my own health had begun to suffer (not weight-related), eventually requiring surgery. I am doing well now and continue a more subtle message of size acceptance even now in my books. 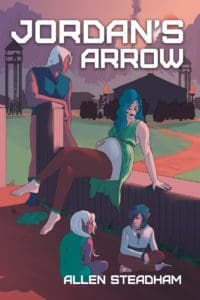 I began writing and drawing my own comics by hand at age ten (in 1980). Specifically, I created a superhero team comic called “The AR-MEN.” I continued creating those stories for twenty years, even scanning those pages and putting them on the internet as early as 1994. Many characters and certain story elements from the AR-MEN comics were adapted into what became my debut novel “Mindfire” with Ambassador International. In 2003, my wife helped me co-write an original Christian webcomic called “Due East,” which we continued until 2009. “Due East” won two webcomic awards in 2008: Best Spiritual Comic and Most Profound Comic.

I am a Star Trek nerd. I grew up loving the stories and characters in the Original Series and watched all of the movies and series that followed. Between 2005 and 2016, I only read Star Trek novels. And in 2009, I had the opportunity to interview Leonard Nimoy for one of ISAA’s podcasts. I do not do cosplay.

Learn more about Allen Steadham and Jordan’s Arrow, book two of the Jordan of Algoran series, by visiting www.allensteadham.com.