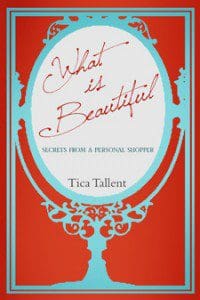 For immediate release: Friends say Coco Chanel must have been speaking about Tica Tallent when she said a girl must be two things… classy and fabulous. Tallent, a former model, spent 15 years working as a personal shopper, helping women of all shapes and sizes dress their best. Her new book What is Beautiful: Secrets From a Personal Shopper reveals simple tips for dressing confidently including:

Self-esteem has become a national crisis, especially among young women. A recent survey found that seven in ten girls feel they do not measure up in some way—including how they look. “My hope is that my book will be an inspiration for all women,” says Tallent, a resident of Anderson, South Carolina. “I want women to know we are all beautiful because we are made in God’s image.”

Tallent speaks regularly at various women’s groups and church functions. She has several upcoming events scheduled including signings at the Anderson County Women’s Club Fashion Show on September 28 from noon-2pm, Greenville’s Millie Lewis Modeling Agency on September 29 from 2-5pm, and the Merle Norman Cosmetic Studio in Anderson on October 1 from 10am-1pm. She’ll also be at the Anderson Mall Belk store on October 4 from 11am-3pm and Belk at Haywood Mall on November 1 from 11am-3pm.

Tica and her husband live in Anderson, South Carolina. Published by Ambassador International, What is Beautiful: Secrets From a Personal Shopper, $12.99, is set for a mid-September 2011 release. Learn more at www.TicaTallent.com.