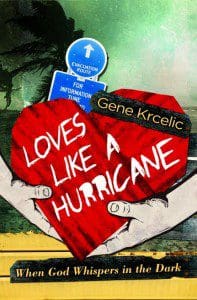 Author asks “If you never existed would this world be any different?”

For immediate release: Experts are already predicting a rough 2011 hurricane season with 17 named storms including three major hurricanes of category three or higher. But author Gene Krcelic says for Christians, the storm never stops. “We are constantly lashed with our physical sin, our doubts and our disbeliefs,” says Krcelic. “When you accept Christ it doesn’t mean the storm is over. In fact you’re in a greater torrent and that’s when the work starts.” Fittingly, Krcelic’s new book Loves Like A Hurricane: When God Whispers in the Dark, blows into stores during the heart of hurricane season, in July 2011.

Krcelic, the president of the Premier Foundation, says his own faith journey began with the most costly storm in history, Hurricane Katrina. A near death experience the night the storm hit along with his own disaster relief work proved to be pivotal moments in his Christian walk. “I came back home from Louisiana and my life was forever changed,” he says. Since then he’s traveled with the Premier Foundation to communities ravaged by poverty and natural disaster. These areas include Haitian refugee camps in the Dominican Republic and orphanages in the heart of Mexico’s drug war.

In Loves Like a Hurricane, Krcelic asks readers to step back, look at their lives and ask themselves how the world would be different if they never existed. The author hopes to inspire others to live life with a renewed hurricane-like faith, encountering God’s fathomless love. Loves Like a Hurricane shows us what God’s voice looks like when He whispers to us in the dark, during unlikely times in our lives-even when we aren’t listening. It pushes us to search our heart and to look at our world as if we never lived, to truly look and see if we individually have made this world a better place. A portion of the proceeds of Loves Like a Hurricane will support the Premier Foundation.