We’re slashing the price on more than a dozen of our most popular non-fiction titles! These ebooks are all just 99¢ each starting on Black Friday and running through Cyber Monday. That’s a discount of up to 90%! Load up your e-reader now because these deals won’t be back around any time soon!  And don’t forget– we’ve got a huge stack of fiction discounts too! 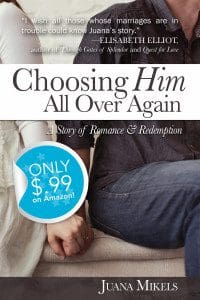 Grace In The Middle: BUY NOW!

Choosing Him All Over Again: BUY NOW!

Chaplains of the Bible: BUY NOW! 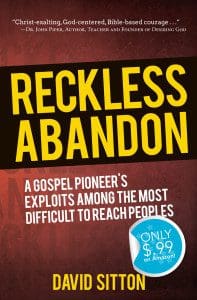 From The Mind of God: BUY NOW! 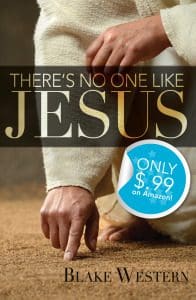 For 24 Hours we’re offering two powerful non-fiction titles for just 99¢ each! Pick up David Sitton’s books Reckless Abandon: A Gospel Pioneer’s Exploits Among the Most Difficult to Reach Peoples and Hard Fighting Soldier: Joe Cannon: 65 Years of Pioneer Gospel Exploits for the Glory of God for less than a buck for the Kindle during our one-day sale event. After Thursday the price will go up to $2.99 through the weekend, and then it will return to regular price. So don’t wait- pick up these books right now for just 99¢ on Kindle. 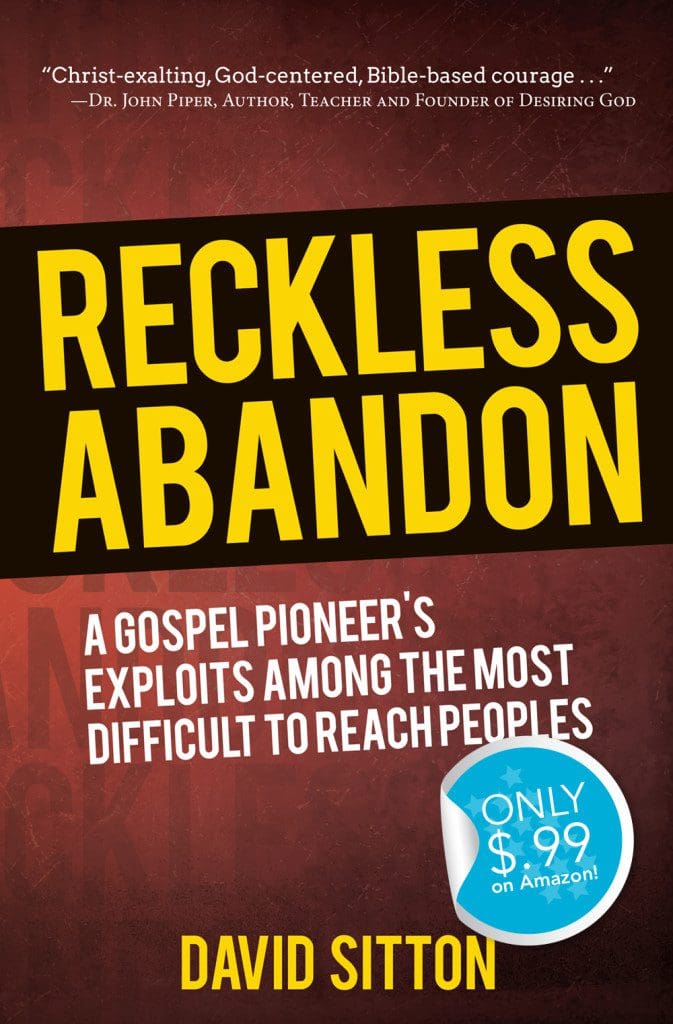 Synopsis: Reckless is right when the cause is Christ.

God catapulted 20-year-old David Sitton from the beaches of south Texas to the stone-aged tribes in Papua New Guinea. Sitton traded sand and surf for cannibals, giant mosquitoes, crocodile-infested swamps, malaria, and a hostile sorceress in order to advance the Good News of Jesus among unreached peoples. Reckless Abandon is a bare-knuckled dare to count the cost and seize the privilege of working with Christ in His worldwide mission. BUY NOW 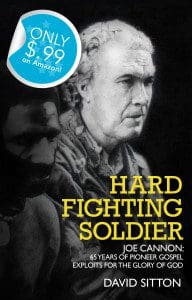 Synopsis: Spearheads pierce targets!  Joe and Rosa Belle Cannon joyfully spearheaded the gospel of Christ for more than five decades into the most complex, post-World War II cultures of Japan and Okinawa.  After 24 years in the orient, Joe and Rosa Belle received new “orders from headquarters” and set themselves on “patrol” with the gospel, hiking with it, for days at a time, into some of the farthest flung tribes on the island of Papua New Guinea. BUY NOW

This Cyber Monday Ambassador International is slashing the price on 10 of our most popular non-fiction titles! All of these books are just $.99 each: 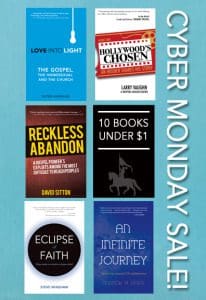 Love Into Light: The Gospel, The Homosexual and The Church BUY NOW!

Reckless Abandon: A Gospel Pioneer’s Exploits Among the Most Difficult to Reach Peoples BUY NOW! 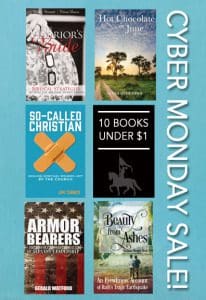 For 24 hours we’re offering a thrilling true story for just 99¢! Pick up David Sitton’s inspiring biography Reckless Abandon for less than a buck for the Kindle during our one-day sale event. After Thursday the price will go up to $2.99 through the weekend and then it will return to regular price. 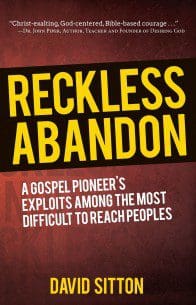 Synopsis: Reckless is right when the cause is Christ. God catapulted 20-year-old David Sitton from the beaches of south Texas to the stone-aged tribes in Papua New Guinea. Sitton traded sand and surf for cannibals, giant mosquitoes, crocodile-infested swamps, malaria, and a hostile sorceress in order to advance the Good News of Jesus among unreached peoples. Reckless Abandon is a bare-knuckled dare to count the cost and seize the privilege of working with Christ in His worldwide mission.

Top Christian Authors to Watch in 2014

It’s a new year and 2014 is already proving to be a great one for books! Vyrso.com recently released their list of “Top 15 Authors to Watch in 2014” and Ambassador International is thrilled to report that three of our authors are on the list! Here’s what Vyrso has to say: “Honestly, we couldn’t be more excited about the talent coming out this year. From names you’ve probably never heard before (but will soon), to already-burgeoning stars, this list represents our top 15 picks (in no particular order) of authors to watch in 2014.” To see the full list of 15 authors visit blog.vyrso.com. Here are the three Ambassador authors from the list: 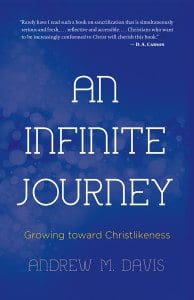 Although not a household name quite yet, Dr. Davis was recently  given the honor of speaking alongside some big-name Christian authors at the CrossCon conference, including John Piper, David Platt, David Sitton, and others. His first book, An Infinite Journey, has already received a glowing review from D. A. Carson and is expected to receive even more praise once it’s released January 10.

After publishing Reckless Abandon and founding an organization that sends missionary teams to plant churches across the globe, Sitton has even bigger plans for global outreach in 2014. He has two new books slated to come out this year: a biography on his late mentor, Joe Cannon, a global missionary, followed by Ekballo—a book about being called to missions work and sharing God’s good news with the world. 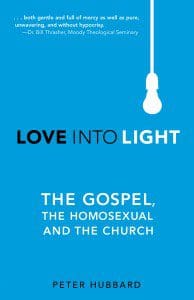 Love Into Light: The Gospel, the Homosexual and the Church was one of Vyrso’s bestselling books of 2013 and was also just listed in Tim Challies’ Top Books of 2013. Even though this was Hubbard’s first major book release, he wasn’t afraid to tackle one of the church’s most controversial topics—homosexuality— with both passion and care. At the cusp of 2014, this book is still gaining traction and is getting the author fired up for a followup title.

Score David Sitton’s book Reckless Abandon: A Gospel Pioneer’s Exploits Among the Most Difficult to Reach People’s for an incredible price! From August 27-30 Christianbook.com is featuring this powerful title in its Midweek Madness sale. During this time you can add Reckless Abandon to your library for just $6.99, half off the regular price.

Check out what other readers are saying about Reckless Abandon:

“David Sitton provides a marvelous window into unconventional tribal outreach. His conversational style and short chapters makes this book an easy read. He is both transparent and inspirational as he shares how God used his life to take the good news about Jesus to remote tribal people of Papua: New Guinea. Great book!” -Michael Eugene Mosier, Amazon Reviewer

“David Sitton has a heart and soul for Christ and telling the world about Him that has left my heart burning with a longing to do all I can to follow our Lord’s great commission. The sooner it’s done the sooner He will come back and make this earth and all who love Him what we were meant to be from the beginning. God bless you and thank you for such a wonderful life loving our God!!!!” -MT Taylor, Amazon Reviewer

If you missed the Google + Hangout with author David Sitton don’t worry! You can watch the entire interview now on YouTube. Pick up a copy of his book Reckless Abandon for the Kindle, on sale for a limited time for just $4.99. Special thanks to Gospel eBooks for co-hosting the event with us! 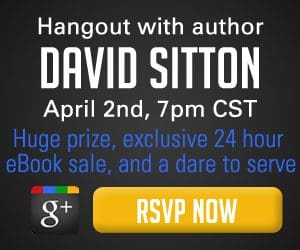 Is Jesus simply not worth the risk to many of us? David Sitton’s book Reckless Abandon is a bare-knuckled dare to seize the privilege of working in Christ’s worldwide mission. Sitton will be offering up a challenge in a Google + Hangout Tuesday, April 2 at 7pm Central. You’re invited to attend this lively chat, enter to win a huge prize and take advantage of an exclusive 24-hour eBook sale. The free event is open to the public and hosted by Gospel eBooks and Ambassador International. Please RSVP now!

In Reckless Abandon: A modern-day Gospel pioneer’s exploits among the most difficult to reach peoples, author David Sitton inspires and encourages readers through his own experience working in cannibalistic areas of Papua New Guinea to risk their lives for the gospel. “If we, as gospel ambassadors, are unwilling to suffer even as much as soldiers and firemen, could the reason be that we don’t treasure Christ enough or value the gospel enough to sacrifice significantly for its advancement into unreached regions?” asks Sitton in his new book.

For every Reckless Abandon Kindle download purchased on April 2nd Gospel eBooks will donate $4 to the ministry. Enter below for your chance to win the complete DVD set from Dispatches From the Front and a $100 Amazon gift card. The winner will be drawn during the Google Hangout. So please join us for this interactive and inspirational free chat with author David Sitton.

Along with your sunscreen and towel there’s something else you must remember when hitting the beach this summer– a great book of course! Can’t decide what to stuff in your beach bag? We’re making it easy with our list of the top five Christian beach reads. 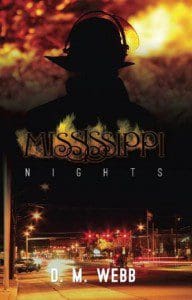 Two brothers, one death–the bond of brotherhood faces its greatest challenge against resentment and guilt.

Can the love between two brothers eventually win against pain and guilt?

When Firefighter David Boyette’s fiancée perishes in a car fire, he blames his brother, Sgt. Jeremy Boyette, for her death. Three years later, David returns home with a dark and devastating secret. With the help of family, a woman’s love, and a small child’s devotion, can David overcome insurmountable odds as he and Jeremy face the bitterness that enslaves him? Together the brothers must decide if the bond of brotherhood is stronger than resentment and hate.

2. Love a Story About Skeletons in the Closet? Crossing Values 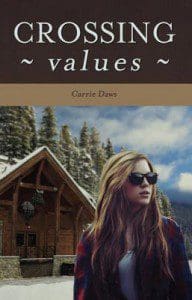 For years, Amber traipsed around the Northwest avoiding the skeletons in her closet. Job-hopping every few weeks, she refused to let anyone get close to her as she slowly made her way east. As winter plants itself firmly across the Rockies, she decides to take a chance on a job at a logging company with a family different from any she’s ever known before. Watching the family interact creates more questions than answers for Amber. Feeling like she’s entered the happily-ever-after written at the end of a fairytale, she watches for cracks in the facade. Surely as the days pass, the play-acting will cease and the real family will emerge. Or could she be wrong? Could they truly be genuine? Could Faye understand the trauma from her past or Peter think of her as more than just the winter office help? Could this family really hold the key to what she’s seeking? 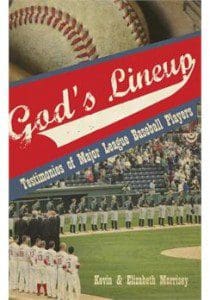 God’s Lineup is a collection of testimonies from Major League baseball players and how Christ has impacted their lives on and off the field. There are trying times in the sport of baseball and among Christians. This book is a breath of fresh air for both baseball fans and Christians. It illustrates how all people, including the top baseball players, face trying times and how being saved has changed them and the way they play the game.

Each chapter focuses on one ball player and tells the story about how their life was before knowing Christ, how they came to know Him and how their life has changed.

4. Need to Get Lost in a Novel with Layers? The Painted Table 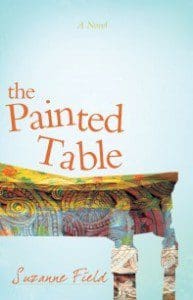 Saffee Quimbly has always sensed her “normal” Quimbly household was far from normal. A television? No need. Having friends over? A mistake not to be repeated. Unreasonable expectations and criticism? Painfully expected. And all part of “normal.” But her mother’s unpredictable spells of arguing with imaginary tormentors, a Norwegian heirloom table subjected to countless layers of paint during such fits, and her father’s refusal to seek help for his unstable wife—these too are “normal.” Saffee meets the wide-open world with these secrets stowed away, and she plans to keep things that way. Jack, a blind date gone right, helps Saffee gain victory over the past, and connect to spiritual moorings.

5. Want to be Wowed by an Impossibly True Missionary Tale? Reckless Abandon 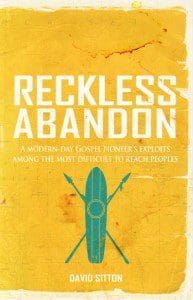 David Sitton was barely a man when he left surfing and partying to live in Papua New Guinea, a faraway, perilous land. Leaving Texas with a Bible, a suitcase (and a surfboard), he took the gospel into cannibalistic areas to people who had never heard the name of Jesus. For thirty-four years God has used him to help train missionaries, spread the gospel and establish dozens of churches in remote regions. Through this book, experience the amazing things God did as David recklessly abandoned his will to the will of God.