Home » Blog » Our Top Picks for a Chilling Read!

Our Top Picks for a Chilling Read!

Do you enjoy books that bring chills to your spine and keep you from falling asleep at night? Look no further, Ambassador International’s staff picked our top three titles to do just that for you! 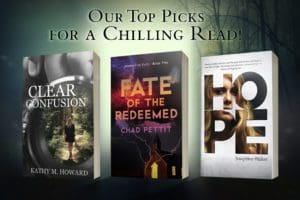 Charlotte Hallaway needs to come to terms with her father’s death. He had been her only family, and she wasn’t handling her grief well. It was just supposed to be a few weeks of peace and quiet to process it all, but then she saw them-a drug deal and a murder within seconds of each other.

And they saw her.

Now running for her life, Charlotte boards a bus to escape her pursuers and wakes up the next morning in the woods of Jennings, Georgia, without a memory of how she got there or of who she is. All she knows is an underlying fear she can’t seem to shake.

When two hunters find her battered and scared, can she put aside the clear confusion she’s experiencing to trust them? She wants to trust them, especially Nicholas, but fear is holding her back. Trust is incredibly hard when one is so clearly confused. Could it be he and his friend are not who they claim to be?

2. Fate of the Redeemed by Chad Pettit

After two and a half years of deep depression, anger at God, and guilt over the death of her husband and twin girls, all bestselling romance writer Jessica Lynn Morgan wants is to buy a house, get back to writing, and live out her life alone in peace. And the little town of Hope, Wyoming, seems to offer the peace she needs. Or does it?

Unfortunately, her dream house is rumored to be haunted. Not one to believe in ghosts, she fights for any logical explanation for the things happening that seem to warn her off.

Once she moves in, the threat against her life becomes real. Clearly, someone or something wants her out. Now. And her stubbornness could cost Jessica her life.

Have a chilling read!