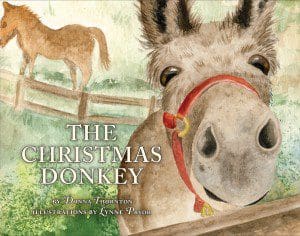 For immediate release: Druplet the donkey, named after a tiny bump of juice on a raspberry, had big ambitions. Druplet may have been a donkey, but she dreamed of being a strong, gallant prize horse like the ones she saw in a nearby pasture. Like many of us, Druplet felt she was not good enough just as God made her. But as Christmas approached, Druplet was needed for a very special assignment that only she could fulfill. Through that assignment Druplet learned the story of the first Christmas, gaining a new understanding how he was uniquely created by God.

Druplet isn’t just a character in the newly released book, The Christmas Donkey (Ambassador International; September 2011; $14.99, hardcover) —she’s a real donkey living on an Upstate raspberry farm with a family that loves her just the way she is. Author Donna Thornton grew to love children’s books while reading to her sons Robert and Stephen, but after they moved on to more mature stories, Donna started to write them. “I hope The Christmas Donkey is welcomed into many homes this holiday season,” says Donna. “It’s a unique delivery of the great story of all time—Christ’s birth.”

Illustrator Lynne Prior worked on the pieces for The Christmas Donkey while she battled breast cancer. “These illustrations became very therapeutic and provided much comfort and laughter for me during a difficult time in life,” explains Lynne, who received a BFA in Studio Art from Columbia College.

The Christmas Donkey is available online through Amazon.com, Ambassador-Interntional.com and many other retailers. For interview requests please contact publicist Alison Storm via email at media@emeraldhouse.com.