Home » Blog » Will You Chicken IN?

Will You Chicken IN?

From our Publisher’s Desk

I believe we can all agree that the past two months have not gone as any of us anticipated this year would. It feels as though there is no escape from the constant battering of news, safety updates, and personal social distancing requirements. The good news is that as believers in Christ, we do have an escape, a refuge from the storms of life, and a constant peace in times of trial. God is our strength and salvation, so we do not have to fear the unknown. He has a plan to work all things for good in our lives, even things that the enemy tries to use to come against us. 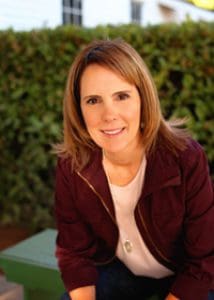 Life has become much simpler. There has been much more time spent with family and/or resting. We have been forced to slow down and change our pace. But instead of looking at our current circumstances as devastating, we should take the extra time we have been given to focus on what is truly important in life: building strong relationships with family, friends, and those around us, encouraging them in their walk with Christ, and for those who do not have a relationship with Him, to continually point them to God and to show His love. Let us use this time to better ourselves and grow spiritually.
JJ Gutierrez talks about building a life of faith instead of fear in her book entitled Chickening IN. She examines how things around us may be scary, due to the unknown, but if we have a relationship with God, we can have a courageous faith.
Although, we may be living in unpredictable and uncontrollable times, we can defeat feelings of fear, doubt, and anxiety by reconstructing them into faith in God and His promises, by stepping into the calling that God has placed on each of our lives, and by not backing down or chickening out.

“The Bible is full of examples of people who acted upon God’s word in faith. They couldn’t see the end result, but without action they were sure not to arrive at the destination. This is the key difference between the stuck and the unstuck, being trapped in a broken, discouraged life or being transformed into a new life of healing, joy, and wholeness. The key is action.”

“During times of fear, self-preservation, and retreat, we often need someone to speak encouragement into our lives – a friend, mentor, or coach – someone to wake us up, to shake us up. That’s exactly what Mordecai did for Queen Esther when he spoke these wise and powerful words, “What’s more, who can say but that you have been elevated to the palace for just such a time as this” (Esther 4:14)? This is the most well-known verse in the book of Esther and for good reason. Esther was in a position of influence unlike anyone else. Her identity as a Jew had been concealed. She was beautiful and found favor with the king. She had learned the customs of the palace and understood how to behave in her new culture. What appeared to be many coincidences was actually God’s providence for the Jewish people – Esther was positioned for this moment.
Have you ever experienced being positioned well and you knew it was your time to execute? It was as if God prepared you all along through your past, your resources, and your relationships lining up, and what seemed disconnected was coming together for a single purpose.”

“Taking risks, living with courage, and following God will most likely lead to unfamiliar roads. There are many kinds of unknown roads. Think of them not just as physical places, but mental, emotional, and spiritual places you’ve never been. Most often they will steer us to climb steep mountains, cross desert plains, sail uncharted oceans, or soar to new heights. If we are willing to travel these unknown roads, we will be challenged by our fears and doubts, and we may be temped to turn back. However, if we refuse to give in to the fear bully, we might discover something new and amazing about ourselves, God, and life.”

“Over and over God invites us to have courageous faith. In fact, there are more than 300 Bible verses commanding us to fear not, don’t be afraid, or to have courage. Christine Caine says in her book Undaunted, “He knew that we would be afraid, that we would doubt. That’s why He tells us again and again in the Bible, ‘Fear not.’” Maybe that’s why God dedicates a chunk of Scripture to encouraging us to be brave – He knew we would need reassurance and support not just once, but on an ongoing basis. However, in order be strengthened by God’s Word, we have to know it. We must study and learn the Scriptures to become the courageous and fearless women [and men] we desire to be.”

These past two months have been extremely trying for everyone regardless of age, ethnicity, or status. We have all experienced 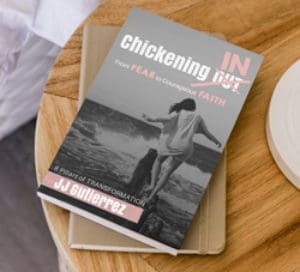 many of the same feelings and emotions. We have fought back fear of the unknown, worry of what tomorrow will hold in store, and the crushing disappointment of a lost job, trip, etc. But we can all stand to learn a powerful lesson from JJ Gutierrez’s book, Chickening IN. We can still have faith in God and His Sovereign plan for us. We can still be obedient to Matthew 6:34 when it tells us, “Therefore, do not worry about tomorrow, for tomorrow will worry about itself. Each day has enough trouble of its own.” And most of all, we can be courageous in our walk with God and grow in His likeness during these times by being obedient to Him. We can’t let fear hold us back from living to the full potential for which God has created and called us. Now, more than ever, is the time to step out of fear and into a courageous faith. We need to start Chickening IN.

To learn more about JJ and Chickening IN, visit HERE.