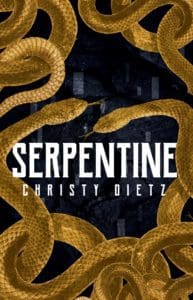 A world crisis caused an evil new order to rise.

Now only a younger generation can fight against it.

From the inspiring mind of Christy Dietz comes Serpentine (Ambassador International, July 13, 2021, $15.99), this season’s toe-curling,
dystopian thriller. Esther is an orphan fighting for survival in an America she no longer recognizes, one taken over by an evil new order, the Federation. Esther has nothing to lose but freedom itself, which makes her the unlikely leader
of the resistance that rises to fight back and reclaim what was lost.

About the Book
Esther was a normal girl growing up in the United States until one day the world wasn’t normal anymore. “These moments in time were so fleeting. Had I known
that in the future I’d be holding on to them for dear life.” Now orphaned, she watches as classmates and teachers disappear for speaking out against the Federation.
Esther is haunted by the mistakes of her parents’ past and is forced to make decisions with consequences that ripple out towards all those around her. “Our predecessors failed us, and now we are here, stuck in this apocalyptic hell where people shoot people tied to trees in the middle of the street, and no one does anything about it. Esther soon finds herself on the run from the Federation in an endless quest for truth. In Serpentine, an ordinary girl is transformed into a leader after realizing that it is not enough to passively oppose the Federation or merely run from it. Esther must lead the Resistance—formed by people willing to sacrifice their lives for freedom, God, and an everlasting hope—and fight against the Serpentine of the Federation and all it represents. Serpentine uses a post-apocalyptic universe to teach an age-old truth: “Mankind is the only one to blame for where we are; the original sin at its fruition.” 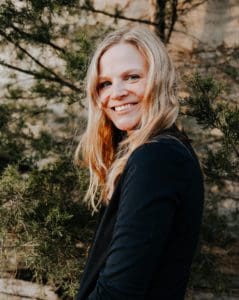 Serpentine is Christy’s debut novel, but she has been writing since she picked up her first crayon. One of four daughters, she spent her childhood years dreaming of becoming Jo from Louisa May Alcott’s Little Women. When she’s not writing, you’ll find her wrestling her two young sons and drinking very large cups of coffee!

To connect with the author or request a review copy of Serpentine, please contact
publicity director Susanna Maurer at media@emeraldhouse.com.