For immediate release: Nearly 4 in 10 non-churchgoing Americans state the reason they do not attend church is due to negative past experiences with churches or church people. According to The Barna Group, the estimate of un-churched people in America is 100,000,000 which means 37,000,000 people claim to have been hurt by professing Christians. In a number that rivals the casualties of World War II, author Jim Turner is offering insight on how Christians can repair the fractured state of the church in his new book So Called Christian: Healing the Spiritual Wounds Left By the Church (Ambassador International; May 2014; $11.99, paperback). 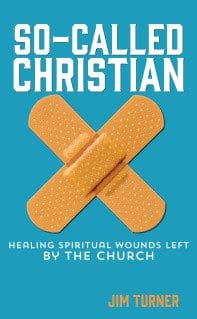 Turner, a former youth director and pastor with more than 25 years of experience, believes that the civil war among Christians has diminished God’s glory. He established Churchone, a non-profit aimed at spreading the word about God’s heart for Christian unity. “We see this as a command of God – not a pretty notion the Apostle Paul thought he’d entertain in a first century world,” explains Turner. “It’s a cry the Church has long lacked the ears to hear.”

So-Called Christian was written for those who have found themselves on either side of the problem: those who have felt judged, belittled or hurt by a fellow believer or those whose good motives and sincere convictions turned ugly. Digging deep into his own personal experiences of dysfunction within church settings, Turner issues a plan for resolution. Turner uses Biblical lessons to explain the best practices for dealing with differences within the Body. He also gives readers practical insight for maintaining personal peace and conviction when confronted with differing opinions and doctrinal disputes. “My ultimate goal is to help create a community of believers that strive to love one another,” says Turner, “regardless of our differing opinions.”

About the Author: Jim Turner is a husband and father of four. Mr. Turner has been in youth or pastoral ministry for over 25 years and has personally experienced the hurt and frustration that disagreement can cause. He has also counseled and mediated on numerous occasions where disagreement threatened to split churches and undo relationships that were years in the building. His experience includes churches from 10 to 1,000 members.

To connect with the author or to request a review copy of So-Called Christian please contact publicist Alison Storm at media@emeraldhouse.com.