WHAT HAPPENS WHEN SPEAKING THE TRUTH BECOMES ILLEGAL IN THE UNITED STATES?

A PASTOR ON THE RUN FOR HIS FREEDOM FIGHTS FOR THE RIGHT TO PREACH THE TRUTH. 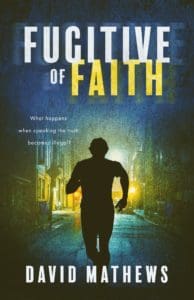 For immediate release: From the creative pen of David Mathews comes a gritty, action-packed
suspense novel, begging the impossible question: what if freedom of speech is lost in
the United States? Fugitive of Faith (Ambassador International, July 27, 2021, $16.99) upsets
the comfortable stasis that so many American Christians find themselves in and creates a suspenseful universe in which the state tries to dictate what pastors can and cannot preach. Fugitive of Faith proclaims the tale of what happens when truth becomes illegal and Bible-teaching Christians must run for their freedom or risk imprisonment.

About the Book
Pastor Pete Holloway is an ordinary Bible-believing pastor, Iraqi war vet, husband, and father in San Francisco, California. His world is upended when he is called to the local police precinct to answer to charges of disseminating hate speech per the Hate Speech Reparation and Elimination Act recently voted into law by the state of California. Pastor Pete soon realizes that he must make a choice: remain home and be arrested or abandon his family and church and begin the life of a fugitive, searching for freedom. He chooses the latter, and the man of God becomes the man on the run. Fugitive of Faith is far more than a dystopian “what if ” novel. It is an insightful, necessary soul search of the ordinary American Christian. As Holloway searches out legal recourse to help him regain his freedom, he begins to realize the dark layers of his own sins. “Even if we think we can only do a little, we don’t have the option of doing nothing.” Fugitive of Faith reminds its readers how precious freedom is; how rare truth is; and that each human being, no matter how outwardly righteous, hides his own sin deep within his heart. This thrilling novel challenges the preconceptions many hold dear, while taking its readers on a wild foray through California’s legal system. Christians around the world will be challenged and molded by this political thriller set in the infamous state of California. 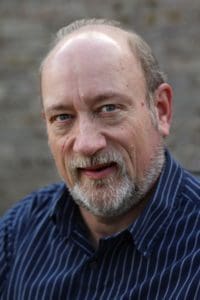 David Mathews was born in the small town of Friend, Nebraska, a community of 1100
people once listed in Ripley’s Believe It or Not for having the world’s smallest police
station—a tiny tool shed previously used by highway construction crews. He grew up
in small towns in Kansas and Indiana before settling in Indianapolis after college. David
describes himself as a “big dreamer with an over-active imagination.” Now living in
Ohio, David and his wife, Donna, have six children between them, along with a son-in-
law, daughter-in-law, three grandchildren, and two Boston terriers. He enjoys home
remodeling, woodworking, bicycling, camping, and loves being a grandfather. David also
never grows tired of watching Andy Griffith reruns.
To connect with the author or request a review copy of Fugitive of Faith, please contact
publicity director Susanna Maurer at media@emeraldhouse.com.