SALE! Starting today through Sunday you can enjoy Amazon 5-star fiction “The 20th Christmas” by Andrea Rodgers for just $.99 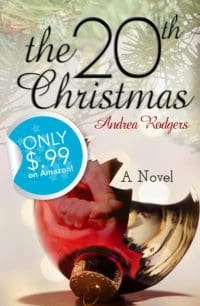 Arianna Tate has a simple and fulfilling life—until four days before Christmas when her young son is kidnapped. For two decades, she grieves the loss of Chase and struggles with her marriage to her husband, Alan.
Meanwhile, Lydia Feller mourns the death of her estranged sister, who spent years living on the streets with mental illness and substance abuse. Lydia adopts the boy that she believes was her sister’s son and raises him in a happy, stable home with her husband, Daniel, and their four children.
God works in miraculous ways as, twenty years later, both women’s worlds collide . . .