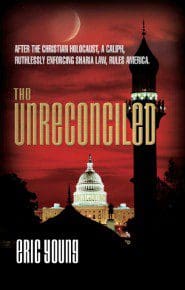 After the Christian Holocaust, Islam Rules

For immediate release: In the time it takes to read these paragraphs, another Christian will be killed because of his or her faith in Jesus Christ– 160,000 believers around the world will be slaughtered this year alone. Over the last 20 centuries 70 million Christians have been murdered for their belief in Christ. It’s happening now in countries like Iran, Libya and Egypt, but The Unreconciled (Ambassador International; September 2012; $16.99/paperback) a new suspense-filled political thriller from Eric Young explores the idea of a Christian holocaust on American soil. “The Unreconciled articulates the fears of many. Religious wars are unimaginable to the American mind because we enjoy a safe harbor from religious persecution. But from the Iranian hostage crisis in ‘79 to 9-11 to the assassination of our ambassador in Libya just weeks ago, radical Islamists have been at war with us for four decades. Our attackers do not want our money, our industry, or our land. They want to rob us of our most fundamental liberty—our faith,” says Young. “Can you imagine how dark and pitiless the world without a Christian America would be? I have.”

Set in 2084, The Unreconciled follows Denisa Graceon, an archeologist, as she searches for relics of the extinct Christian faith. While searching in the Appalachian wilderness, she is shocked to discover a few forgotten Christians still exist, “the Unreconciled.” Enamored by them and immersed in their faith, Denisa becomes a believer and falls in love with the sworn guardian of the very relic she was commissioned to steal. When she discovers the all powerful Caliph plans to massacre these last Christ-followers, she launches a desperate gambit to save them.

For more information or to connect with Eric Young please contact Ambassador International publicist Alison Storm via email at media@emeraldhouse.com. You can also learn more at Facebook.com/TheUnreconciled or Twitter.com/TheUnreconciled.