Home » Blog » Five Things about J.M. MacLeod of “The Siege of Logon’s Bridge”

Five Things about J.M. MacLeod of “The Siege of Logon’s Bridge”

Learn more about your favorite Ambassador authors with our “5 Things” series. J.M. MacLeod is the author of Tolkien-esque fantasy series, The Saga of the Singing Sword Brigade, with book four The Siege of Logon’s Bridge releasing on March 7th! Check out John’s five fast facts below… 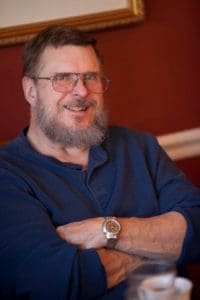 Being at least half-Scottish heritage, I’ve always had a fascination for sword and crossbow stories. The novels of Kidnapped and Rob Roy and Treasure Island often took over my imagination and filled my playtime hours in the mountain woodlands of eastern Pennsylvania as I grew up. The Sunday School and Church my family attended taught us songs like “I’m in the Lord’s Army” and “Onward Christian Soldiers” likening the adventure of soul-winning to fighting against the Devil and his kingdom and rescuing people from a horrible fate.

As a teen, I learned to play guitar, thanks to the Ventures and The Beatles. When I volunteered working with Youth for Christ I met a fellow believer who played keyboard; together we formed The Owl of Light, a Christian folk/rock band, explaining in our testimony that like owls, we were creatures of darkness but came to the light. Actually, we chose the name because we had a big, old stuffed owl that we took along on our gigs.

I met my soul mate, Beverly, in college and married her asap. Immediately after we went from Pennsylvania to Indiana where I had a Summertime ministry/job running a Christian coffeehouse called “The Sign of the Fish” where we tried to introduce counter-culture teens to the Gospel. After returning to PA we were attracted to a local Bible Study group calling themselves “The Move of God” that seemed to take teachings of Scripture to a new level of revelation. Through a series of supernatural events we wound up on one of the Move’s communal farms to await the End Times and the Return of Christ. The revelations and supernatural phenomena soon became weird and quite a few of the leaders of the group became abusive to many of the “non-elite.” We left not only the farm but The Move as well.

We started raising children, four in number, all born in the 1970’s spaced about 2 years apart. I became a commercial school bus driver and did odd jobs during the summer months to support the family. The lay-over hours between bus runs is when I started to write about our journey through deception in The Move and what we learned from that bitter experience. I also was enchanted with Tolkien’s writings, reading The Hobbit and The Lord of the Rings several times, enjoying them again and again as if I was visiting old friends. Then I began to wonder if I could ever write a Christian fantasy like C. S. Lewis but following more the genre of Tolkien. Thus began The Saga of the Singing Sword Brigade. 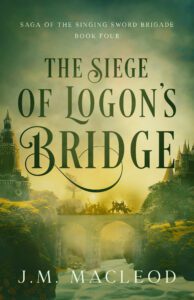 While learning the craft of writing (as I still am) in addition to school bus driving, I worked as a reporter/photographer on two New England newspapers, manager of a school bus company in New England, truck driver in Tennessee and am currently retired but still driving for LYFT— until royalties come rolling in.

Our four children and their spouses have produced for Beverly and I fifteen grandchildren who, in my unbiased opinion, are the smartest, most good-looking, best-natured and obedient children ever born.

You can find John on his website, Goodreads, and Bookbub! Learn more and order John’s newest novel, The Siege of Logon’s Bridge, here!